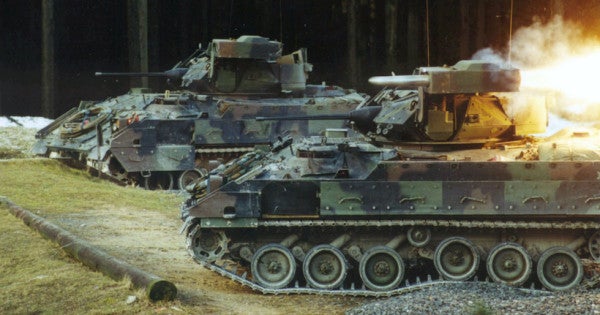 The Army has begun shopping around for a robotic armored vehicle that can replace some of the branch's old M-2 Bradley manned fighting vehicles.

“The next generation of combat vehicles will close the last tactical mile, giving our soldiers a position of advantage,” said Brig. Gen. Ross Coffman, who oversees one of the Army's development teams for robotic vehicles.

“Our combat vehicles will have the ability to transition through those disruption zones with lethality and survivability … mobility, to be able to fight the enemy on our terms and become victorious.”

Two of the unmanned vehicles should fit in one U.S. Air Force C-17 airlifter, the Army stated.

The new vehicles should include only “attainable” technologies, Coffman said. The Army wants to avoid the spiraling costs and repeated delays that have doomed previous efforts to develop new manned and unmanned fighting vehicles.

Most famously, the service's Future Combat Systems — a network of lightweight, manned and unmanned vehicles — burned through billions of dollars before then-defense secretary Robert Gates in 2009 canceled it.

Likewise, the Army in 2014 canceled a program to replace the 1980s-vintage M-2 after the new vehicle's design grew too big, heavy and expensive.

The service's March 2019 request for proposals from industry formally begins a competition for prototype designs. The Army expects in mid-2020 to choose up to two industry teams to build 14 prototypes.

To pay for the robotic vehicle and other new equipment, in its 2020 budget proposal the Army asked Congress for permission to slow, shrink or cancel hundreds of other programs. The Army's $190-billion budget request, which represents an $8-billion boost compared to the branch's 2019 budget, channels $9 billion into six main development efforts, including new vehicles.

The Army in 2020 plans to test experimental robots in order to gather data that could inform the wider program to acquire unmanned vehicles. “We're doing these experiments to test a series of hypotheses,” Coffman said.

The 2017 test represented a turning point for the Army. “We're at the point of heightened expectations and we're at the trough of disillusionment,” Paul Rodgers, director of the Army's Tank Automotive Research Development and Engineering Center, said of the war game.

Coffman said the first 2020 trial would involve soldiers in two “surrogate vehicles” remotely controlling a set of robots that “bear a resemblance to the M-113 armored personnel carrier,” according to Defense News.

The second experiment, in 2021, would involve three times as many robots and control vehicles, Coffman said.

SEE ALSO: The Army's Plans For A 'Super' Bradley Fighting Vehicle Are Dead