Why the Army is outgunned in Europe compared to Russia

In 2016 RAND war-gamed a Russian invasion of the Baltics. In RAND's scenario, the Russian forces quickly overrun lightly-armed NATO forces. The Western alliance quickly deploys helicopters and air-mobile troops to confront the Russian advance. But NATO tanks are too slow to arrive 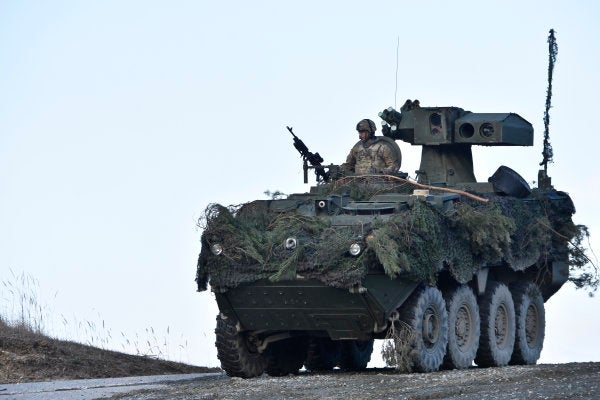 A four-person vehicle crew with the U.S. Army's 2nd Cavalry Regiment in Europe won a personal victory in early February 2019 when they beat out other crews to claim their squadron's “top gun” prize.

But the crew's achievement underscores an uncomfortable fact for the U.S. Army as it struggles to match Russia's own military build-up in Europe.

The crew of the M1134 Anti-Tank Guided Missile Stryker operates the heaviest fighting vehicle that the U.S. Army permanently keeps on the continent. Meanwhile Russia has grown and upgraded its own forces along the eastern flank of the North Atlantic Treaty Organization.

In Europe, the U.S. Army is out-gunned.

“One ATGM crew proved their expertise to be greater than that of their peers,” 4th Squadron of the 2nd Cavalry Regiment boasted on social media. A photo depicts the four-person Stryker crew proudly standing in the snow in front of their eight-wheel armored vehicle holding empty tubes that once held Javelin anti-tank missiles.

The M1134 ATGM Stryker features a turret packing two Javelins. A Javelin can carry a roughly 20-pound warhead a distance of more than a mile.

4th Squadron, 2nd Cavalry Regiment is based in Vilseck, Germany. It and three other regiment squadrons with their 300 Strykers represent the only mechanized American forces permanently in Europe. The Army's 173rd Airborne Brigade also is based in Europe.

The U.S. Army temporarily deploys one armored brigade at a time to the continent, each on a nine-month rotation. A typical armored brigade has around 90 M-1 tanks and 130 M-2 fighting vehicles plus around 18 M-109 self-propelled howitzers.

For decades the Army maintained heavy forces in Europe in order to defend against the Soviet Union and later Russia. Force levels precipitously decreased following the end of the Cold War, but as late as 2012 the Army had four brigades in Europe, two of them with tanks.

The Obama administration cut the two Europe-based tank brigades in the wake of the 2011 debt-ceiling squabble with Congress that resulted in the Budget Control Act and automatic “sequestration” budget cuts. Army troops permanently in Europe declined from 40,000 to around 25,000.

Two years later in 2014, Russia invaded Ukraine. The Pentagon scrambled to restore its fighting strength in Europe. The Obama administration budgeted billions of dollars for temporary deployments to Europe under the auspices of the European Reassurance Initiative.

But a permanent increase in Europe-based forces was not in the offing. And five years after the Russian invasion of Ukraine, the 2nd Cavalry Regiment with its Strykers still is the heaviest American formation that's always in Europe.

The 2nd Cavalry Regiment realized early on that it stood little chance of defeating a large force of Russian tanks. In 2015 the regiment urgently pleaded for heavier weapons for its vehicles, which at the time primarily were armed with M-2 machine guns.

Congress appropriated $300 million to upgrade around 80 Strykers with a new turret sporting a 30-millimeter gun. Another 80 vehicles would get turrets with twin Javelin launchers, transforming them into the kind of M1134 ATGM Stryker that the prize-winning 4th Squadron crew operated. The 160 up-gunned Strykers began arriving in Europe in late 2017.

But even a missile-armed Stryker weighs just 20 tons, a third of what an M-1 tank weighs. A Stryker is not a tank. In a direct fight between U.S. and Russian forces in the early days of a theoretical conventional war in Europe, the Russians with their heavier and more numerous vehicles have “an important advantage,” RAND warned.