About 1,500 Schofield Barracks soldiers, 16 helicopters and hundreds of Humvees, heavy equipment and shipping containers are headed to Thailand for the first stop of Pacific Pathways 2020, an Army approach to bulking up in the region with a light but persistent footprint that follows the "places, not bases" mantra of the Pentagon 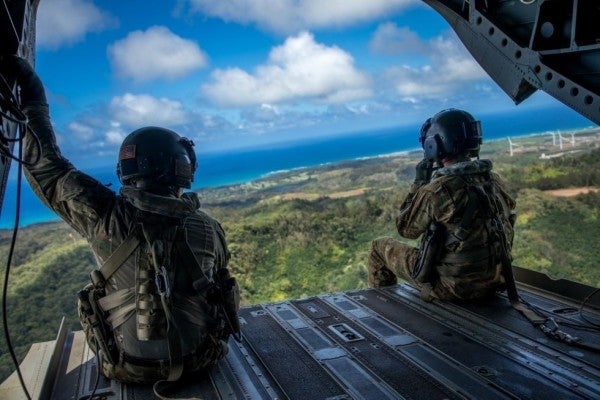 About 1,500 Schofield Barracks soldiers, 16 helicopters and hundreds of Humvees, heavy equipment and shipping containers are headed to Thailand for the first stop of Pacific Pathways 2020, an Army approach to bulking up in the region with a light but persistent footprint that follows the “places, not bases” mantra of the Pentagon.

It's not your father's slow, heavy Army anymore. Or, a least, that's the aspiration in the Pacific.

“The Army is reinvigorating our presence and disposition in the Pacific,” Secretary of the Army Ryan McCarthy said while discussing the service's Indo-Pacific strategy Jan. 10 with The Brookings Institution.

It's all aimed at an increasingly worrisome China, and McCarthy said Army presence to develop strong partnerships is key.

“Long before conditions escalate to war, there will be a battle of ideas,” he said. “This is warfare by other means, and decisions will occur in the heart of the people. We must be present to offer an alternative.”

When the average observer looks at the Army in the western Pacific, “they just view us as in Korea,” where there are about 28,500 soldiers, McCarthy said.

“We have thousands of people in Thailand, the Philippines. We're everywhere,” McCarthy said, adding there should be an appreciation “for just how much we are doing, how much more we're going to do in that part of the world.”

In 2019 during exercise Orient Shield with Japan, task force elements were distributed across the Senkaku Islands. The U.S. Army and Japan fired anti-ship missiles.

Soldiers have deployed to the Philippines, and then a company deployed from there to Palau — which the Army hadn't been to in any significant numbers for 37 years.

The Army of the future also is expected to be arrayed around Pacific islands in an anti-ship missile role — as a support to the Navy as a force capable of sinking ships from some of the 25,000 islands in the western Pacific.

In 2018 during Rim of the Pacific exercises, the Army fired a Naval Strike Missile from a truck at the Pacific Missile Range Facility on Kauai and hit a decommissioned Navy ship at sea 63 miles north of the island.

Gen. Robert Brown, former commander of U.S. Army Pacific at Fort Shafter, said in an interview in September as he was leaving office that Defender Pacific would involve mainland soldiers deploying through the second and first island chains to six to 10 Asia-Pacific nations. “Scattered all around,” as Brown put it.

Once in the region, the soldiers will engage in training and security cooperation with host nations.

The first island chain draws a line from Japan and Taiwan through the Philippines. The second island chain is farther east and runs from Japan to the Mariana Islands, Guam and Palau.

With its inception in 2013, Pacific Pathways, which links together a series of exercises on one deployment, has grown in soldier numbers and duration.

The combined 1,500 soldiers from the 3rd Brigade at Schofield and 25th Combat Aviation Brigade will kick off this year's Pathways with the exercise Cobra Gold with Thailand. Smaller elements will branch out to Malaysia and Bangladesh from there, officials said.

On Tuesday at Pearl Harbor, hundreds of vehicles were lined up to board the civilian transport ship Cape Hudson while trucks drove shipping containers on board.

Training during Cobra Gold “is invaluable for us because specifically, there will be a Thai artillery battalion there as well — so being able to work in conjunction with them and seeing how they operate, and some of the things that they do, as well as learning from us in the way that we operate as artillery,” said Maj. Adam O'Donnell, operations officer for the field artillery unit.

The second and third iterations of Pacific Pathways this year will include a Stryker Brigade out of Washington state and an infantry brigade from the Louisiana National Guard, according to U.S. Army Pacific.