For now, and until further notice, a line of sewing machines in the 7th Group's parachute-rigging shed, operated around the clock by the group's riggers, is producing masks. 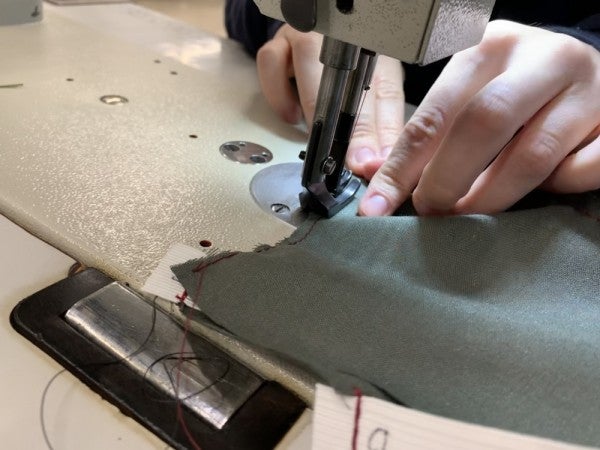 CRESTVIEW — Even before the Department of Defense mandated earlier this month that people on military installations wear masks where social distancing can't be maintained against the spread of COVID-19, the Army's 7th Special Forces Group was making masks for personnel at its Camp Simons as a means of keeping the serious respiratory illness at bay.

In the days since the April 5 DoD mandate, the 7th Group has been making and supplying masks for personnel across Eglin Air Force Base, where the group is headquartered; for the clinic at Hurlburt Field, headquarters of Air Force Special Operations Command, and for the Naval School Explosive Ordnance Disposal unit at Eglin AFB.

And now, the 7th Group is turning its attention to its sister units across the military where its masks might be needed.

The work of mask-making has been assigned to the group's parachute-rigging platoon, whose members have the skills and equipment needed to produce that piece of front-line equipment in the battle against COVID-19, caused by the spreading new coronavirus.

As part of their initial training, parachute riggers learn to use sewing machines to repair damaged parachutes, and those skills now are being applied for a different sort of mission. For now, and until further notice, a line of sewing machines in the 7th Group's parachute-rigging shed, operated around the clock by the group's riggers, is producing masks.

Sgt. Zachary Davies, who was among a half-dozen soldiers sewing masks on Wednesday morning, doesn't see the work as any departure from his reasons for joining the Army.

“I signed up to serve my country, and this is a way to do it,” Davies said.

In addition to the sewing skills involved, the parachute riggers are a natural choice for the work, inasmuch as their work demands perfection, at the possible cost of a human life from a faulty parachute.

The masks, copying a pattern developed in the state of Washington, are being made from surgical draping obtained from the Eglin AFB hospital, according to Brooks. The surgical draping is in relatively plentiful supply, Brooks said, as elective surgeries have been canceled in response to the spread of COVID-19.

The masks are designed for use by general hospital personnel — receptionists, custodians and administrative personnel — who don't necessarily have direct contact with ill patients, but whose duties can take them into many different areas of the hospital, Brooks explained.

“It's a community mask with medical-grade materials,” he said. The masks can be washed or steamed, making them reusable.

The draping, which has a bacterial filtration efficiency of better than 99 percent, comes in large sheets. In the maintenance section of the rigger shed, on long tables next to the sewing machines, the draping is cut into narrow strips that serve as ties, and also into the larger squares that form the nose-to-chin face covering.

“It's a really simple design, and really resilient,” Brooks said.

In addition to the 57 soldiers in the rigger platoon, 15 personnel from elsewhere at Camp Simons are involved in the around-the-clock weekday production of the masks, according to Mejia. The riggers, though, are the only ones entrusted with sewing the straps onto the masks, each one of which is individually inspected before being sent out of the rigger shed.

Mejia, like Davies, sees the work as part of his duties as a soldier, and not all that different from the careful maintenance and packing of a parachute.

As of Wednesday, the riggers were producing more than 400 masks daily, working toward a goal of fabricating 6,400 masks by this upcoming Tuesday. The current pace is a far cry from the initial day of production, when just 10 masks were made.

“Once you get the flow, it's pretty easy,” said Davies.

“I'm just doing it until they tell us to stop,” he said.