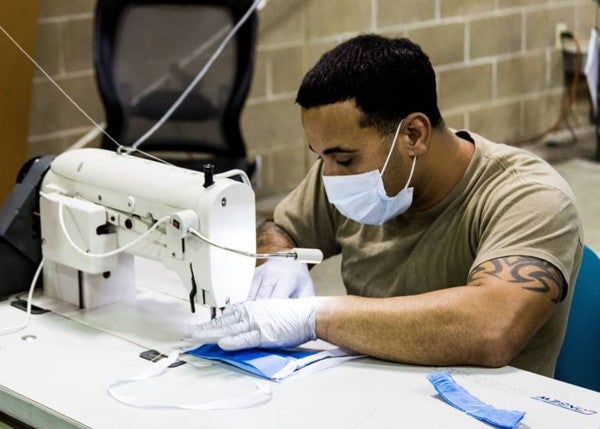 Parachute riggers at Joint Base Lewis-McChord over the last week have used their sewing machines to produce more than 1,000 surgical masks, said Master Sgt. Taylor Cathey, a senior airdrop operations noncommissioned officer with the 1st Special Forces Group (Airborne) at the Washington state military base.

“Every parachute rigger that comes into the Army in our advanced individual training does receive training on sewing and maintenance procedures,” said Cathey, who is leading a team of about 15 soldiers to sew the surgical masks. “So it’s kind of like riding a bike. Once you get back behind it, it’s a little wobbly at first, but once you get into it, it’s pretty simple.”

The unit got a face mask pattern from the Centers for Disease Control and Prevention and blue surgical wrap from Madigan Army Medical Center, which is located on base, Cathey said. They are using half-inch wide strips of cotton cloth to sew the straps.

“It’s still the basic stitch, straight line stitch that we use,” Cathey said. “Most of the techniques we’ve developed from sewing on parachutes definitely transfers to sewing the masks. It actually makes sewing the masks a little bit easier,” she said.

The first batch of masks were then delivered back to Madigan’s emergency room, said Jay Ebbeson, a spokesman for the medical center.

The blue surgical masks are often for one-time use, “and we do go through them,” Ebbeson said. “Getting them from the riggers will help us maintain our supply.”

Using the skills for fixing parachutes to produce the much needed masks has been meaningful, Cathey said.

“It’s been a great opportunity not only for my parachute riggers but also special forces to give back to our community, and to be in the fight against COVID,” she said.

Another unit on the Washington military base has begun to produce mask shields, which have been in short supply around the country due to the COVID-19 outbreak.

The 17th Field Artillery Brigade’s maintainers at Lewis-McChord normally use their four 3D printers to make spare parts for vehicles. Using the four 3D printers and the new process, the base will be able to create between 16 to 20 fully assembled, sanitized face shields a day, said Chief Warrant Officer 3 Richmond Minton, a logistics officer for I Corps at Lewis-McChord.

Over the last week they worked out a simplified process to allow Army bases all over the world — especially overseas locations that may have difficulty getting protective medical gear — to use the supplies and machinery they have on hand to create FDA-approved face shields.

First the unit thought about what supply items would be common across Army installations, Minton said.

Each base, including forward-deployed locations, have planning rooms with large maps and a supply of rolled 7mm acetate sheeting to overlay on those maps, so commanders can use them in strategic planning and then wipe them off.

The common acetate sheeting can be used for the clear front part of the face shield.

Then the 17th Brigade downloaded 3D printing instructions for the face band the shield will attach to from the National Institutes of Health. But the instructions are geared toward major manufacturers, where all of the components of the face shield would be produced in one sterile location.

The reality on a military base, Minton said, is that there may be one building or tent holding the 3D printing machine, but other parts of the process, such as assembling the mask or sterilizing them, would take place in other buildings or tents.

Minton rewrote the process, creating Army-specific instructions, that he then sent back to the FDA for approval.

“We got everything blessed off yesterday,” by the FDA on that process, he said. “Now we are sharing it across everywhere.”

“If a guy has a 3D printer, and he’s in Afghanistan,” he can use the plans from Lewis-McChord, make the face band, then go into the command post on the forward operating base and get acetate sheeting and assemble an FDA-approved face shield, Minton said.

By creating an Army-wide, FDA-approved process, it allows each base to generate its own approved face shields, which could reduce demand from the military on the national stockpile, freeing those up for civilian hospitals, Minton said.