"It is a good feeling knowing that I saved someone's life. I feel proud." 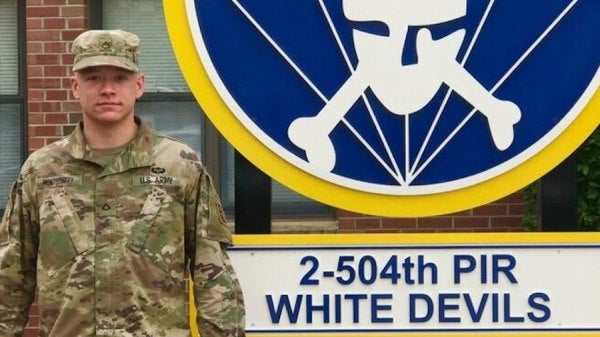 A Fort Bragg paratrooper was honored by the Fayetteville Police Department for the heroism and bravery he showed when a local business owner was robbed and shot.

The awards ceremony highlights the outstanding work of officers and residents who go beyond the call of duty and strive to make Fayetteville a better place, according to the Police Department.

Montgomery says the events on the night of Nov. 30 will be forever etched in his mind. He was stopping to get gas when he heard 12 gunshots coming from Bragg Pawn Shop on Yadkin Road.

Montgomery pulled up to the business and saw that a glass door was shattered. He said he yelled, then saw business owner Ron Ruple on his knees and bleeding.

“I did not have a belt on but used a cable from a power tool as a tourniquet until police arrived,” Montgomery said.

He said Ruple was losing a lot of blood and was going in and out of consciousness.

The two men have spoken since then, and Ruple thanked Montgomery for being in the right place at the right time.

“I will definitely not forget him. It is a good feeling knowing that I saved someone's life. I feel proud,” Montgomery said.

Chief Hawkins said her department was honored to recognize Montgomery.

“We not only appreciate his sacrifices to our country but also his selfless actions he took that night as he provided life-saving measures,” Hawkins said.

Montgomery is from Waterville, Maine, and has been stationed at Fort Bragg for a year.

Police arrested Mario Donte Whitted, 24, in connection with the robbery and shooting. He remains in the Cumberland County Detention Center with bail set at $325,000.

Staff writer Melody Brown-Peyton can be reached at mbrownpeyton@fayobserver.com or 910-486-3568.