This Army Helicopter Pilot Was Shot During A Delta Force Raid On ISIS. He Kept Flying For 5 Hours

An Army helicopter pilot kept flying for five hours in support of a Delta Force ground raid into Syria in... 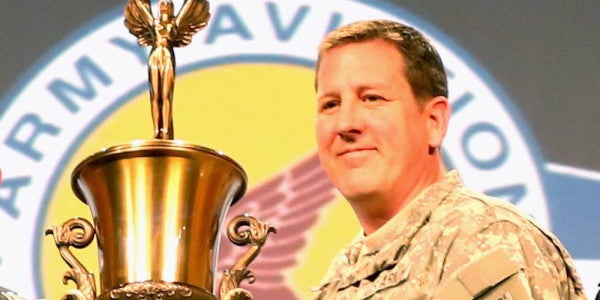 An Army helicopter pilot kept flying for five hours in support of a Delta Force ground raid into Syria in 2014, even after he was wounded by gunfire during the initial assault, according to new documents released by the Department of Deafense.

Siler was the lead pilot during the 10-hour-long raid, which he “meticulously planned and flawlessly executed.”

The new details emerged from the award citation for his Silver Star, which Siler received later that month in addition to the Purple Heart for combat wounds. It was recently released in response to a Freedom of Information Request from Business Insider.

After receiving the go-ahead from President Barack Obama, the Army's elite Delta Force loaded into helicopters piloted by the 160th Special Operations Aviation Regiment (Airborne) during the late and early morning hours of July 2 and 3, 2014 to find and rescue journalist James Foley and other hostages taken by ISIS.

The raid into northern Syria happened in pitch black “zero illumination” — perfect conditions for pilots attempting to stealthily insert troops, both of whom were outfitted with sophisticated night vision goggles. Still, the citation notes the flight encountered “harsh environmental conditions” without getting into specifics.

In what was described by officials speaking to The New York Times as a “complicated operation,” several helicopters dropped off two dozen Delta operators at an oil refinery outside Raqqa, while heavily-armed DAPS helicopters circled overhead to provide air support.

Siler was shot in his right leg by ground fire during the initial assault, according to his citation and other media reports. He was on crutches and wore a walking cast at his award ceremony.

“Staying in the air with a wounded leg for five hours is no small feat, whether or not he's on the controls,” another Army Blackhawk helicopter pilot told Business Insider. “That is pretty heroic.”

According to the pilot, who spoke on condition of anonymity since they were not authorized to speak, a gunshot wound to the leg would make it very difficult for Siler to manipulate his foot pedals, which control the yaw of the aircraft. That's not to mention “the loss of blood and the shattered leg,” the pilot said. “The sheer pain of that.”

The pilot speculated that the copilot likely took control of the aircraft at that point, while Siler tended to his wounds, helped direct fire, and navigated.

Meanwhile, as drones and fixed-wing aircraft flew overhead, the team of soldiers on the ground moved quickly into the safe house where James Foley, Steven Sotloff, and other hostages were believed to be held. But the operators found only ISIS fighters, two of which were quickly dispatched in a gunfight, according to The New Yorker.

“By the time we got there, it was too late,” a Pentagon official told The New York Times in 2014.

We moved 'aggressively to recover our citizens'

Although the raid did not result in the rescue of Americans from ISIS captivity, it was notable in that it was the first time the government acknowledged U.S. troops had operated inside Syria since the war began in 2012, the New York Times Times reported.

“The U.S. government had what we believed was sufficient intelligence, and when the opportunity presented itself, the president authorized the Department of Defense to move aggressively to recover our citizens,” Lisa Monaco, Obama's counterterrorism adviser, told The Times.

After the area was secure, the Delta operators gathered up anything that could yield intelligence or forensic value, according to The New Yorker. After about an hour, they departed on Black Hawks back to an unspecified “neighboring country.”

The secret mission was made public more than a month later on Aug. 20, 2014, a day after ISIS posted a video showing the beheading of Foley by a masked man later identified as Mohammed Emwazi. The British-born ISIS militant carried out the executions of many American, British, and other hostages throughout 2014 and 2015 until he was killed by a coalition drone strike in Nov. 2015.

Siler, now a Chief Warrant Officer-5, still serves with the 160th at Fort Campbell, Kentucky, according to an Army spokesman. He was recognized as the Army Aviator of the Year in 2014.

View his award below: