The Army Is Delivering Pizza MREs Sooner Than Expected — With Sides!

For all those troops who get the munchies in a war zone, the Army is about to deliver. After years... 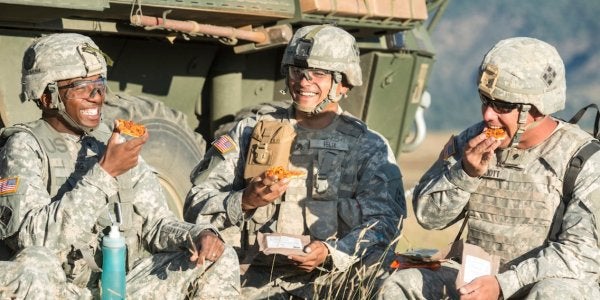 For all those troops who get the munchies in a war zone, the Army is about to deliver.

After years of development, the Army says that its Meal, Ready to Eat pizza will be in soldiers' hands by 2019, with availability in some areas before the end of this year.

Soldiers have been requesting a pizza MRE since the 1980s. By 2012, new technology allowed scientists at the Combat Feeding Directorate at the Natick Soldier Research, Development, and Engineering Center in Massachusetts to begin developing the pizza MRE, seeking to turn the longstanding request for a ready-made pie that troops can heat up in the field into ” a piping-hot reality .”

To qualify as an MRE, the meal has to last three years when stored at 80 degrees or below. Most frozen pizzas will maintain best quality for about 18 months , though they usually remain safe to eat after that.

“With each of those individual components on their own, we can achieve the shelf life, but when you put them together — chemistry happens,” Whitsitt added. “You have four very distinct food matrices all interacting with each other, which can cause some unwanted results. That's why developing a shelf-stable pizza has been so hard.”

The main course of the Army's new pizza MRE

The Army was able to produce a prototype, and field-testing began in August 2014, but expanding production while maintaining quality was a challenge.

In early 2017, the CFD said that during testing to simulate a three-year period on the shelf, which involved putting the pizza in a 100-degree box for six months, the pizza had turned brown, causing an indefinite delay in the development process.

The browning wasn't a safety issue, a CFD spokesman said at the time, but the Army wanted to ensure it was giving troops a quality product. The problem was resolved by adding rosemary extract, which prevented the oxidation that caused the browning, a CFD food technologist told Army Times earlier this year.

“We're able to do a lot of things in the lab, but sometimes when you scale up, working with a producer making these by the thousands, especially with a product that's never existed before and is not available in the commercial market, replicating the process and coming up with the same results is difficult,” Whitsitt said in the release.

“But we overcame challenges and we've got a good product now,” Whitsitt added. “And soldiers will be seeing pizza pretty soon.”

The pizza MRE is expected to be available in some locations before the end of 2018, but most soldiers will likely be able to get their hands on it in 2019.

The new MREs arrived at the Defense Logistics Agency in March, from which the meals ship out on a ” first in, first out ” basis. Army installations will get the new MREs based on how many they have and how they're issued.

A soldier enjoys a Meal, Ready-to-Eat pizza during field-testing.

A standard MRE comes with a main course, side dish, a dessert or snack, crackers or bread with cheese, peanut butter or jelly, and powdered drink mix. Each item is fortified with vitamins, and the whole things comes to about 1,200 calories.

The pizza MRE — which will be limited to pepperoni at first — will come with cherry or blueberry cobbler, a cheese spread with either cheddar or jalapeño cheese, Italian breadsticks, cookies, and chocolate protein powder mix.

The CFD has said MREs aren't loaded with preservatives or chemicals and their shelf life comes from the processing and packaging. Longevity was only one consideration, according to Whitsitt.

“When you break it down, food is fuel. The fuel that powers the soldier,” he said in the release. “We're doing a lot of work into what naturally occurring ingredients are needed to increase, and sustain, high performance for an extended period of time.”

Reviews of the pizza MRE have already appeared online, one of which you can watch below: