Army researchers from Fort Detrick are developing relationships with Ebola survivors in Uganda, who may hold the key to a... 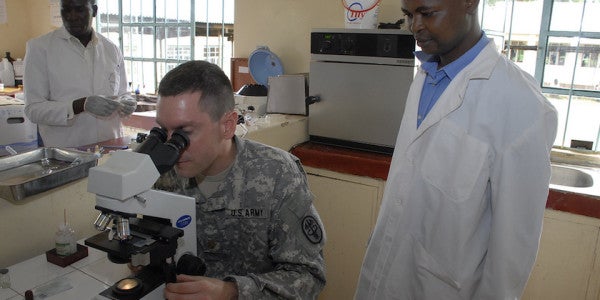 Army researchers from Fort Detrick are developing relationships with Ebola survivors in Uganda, who may hold the key to a vaccine or treatment for the deadly disease.

John Dye led a team from the U.S. Army Medical Research Institute of Infectious Diseases on a trip to Uganda in August. Dye is chief of viral immunology at the institute.

“For the last 50 years, there have been Ebola outbreaks all over Africa, and a lot of them have occurred in Uganda,” he said.

Uganda is a “hotbed of viruses and bacteria,” Dye said, and people there have been living alongside the virus for years.

“We do know that monkeys carry Ebola as well, and monkey meat is a main staple of the diet of people in Africa,” he said.

Since 2011, researchers from the institute have traveled to Uganda about every six months to collect samples of Ebola survivors' blood. Certain types of cells in their immune systems may indicate how the body can successfully fight off the disease.

“What's different about them and their status of their body, their genetics or their immune system that allowed them to survive when 70 percent of the other people succumb?” he said.

Some survivors are still suffering problems with eyesight and arthritis, even though they have fought off the virus, Dye said.

As in the West African outbreak, Ebola survivors in Uganda, in East Africa, were often shut out from their communities.

“They couldn't get jobs. They couldn't go back to their previous jobs because they were seen as cursed, where, ironically, the survivors are actually blessed,” Dye said.

As researchers from a foreign country, Dye's team had to spend time with native Ugandans to explain why their blood was needed and why the survivors were so important.

“Everywhere we go, we try to get that message across that these individuals are not cursed, they actually are so lucky that they survived this infection that normally kills about 70 percent of the people ,” Dye said.

The Army institute also sent researchers to Liberia at the height of the West African Ebola outbreak. They helped create the first center to monitor genetic changes in the Ebola virus that may affect the effectiveness of future vaccines and treatments.

The genomics center is based at the Liberian Institute for Biomedical Research.

The Army institute has been involved in the development of Ebola treatments including the “ZMapp” drug, which proved to be an effective treatment during the West African outbreak.

The institute developed one of three antibodies in the cocktail-style drug, which is now licensed to a biopharmaceutical company in California.

Dye said the institute's current work focuses on treating and vaccinating against other strains of the virus, which are genetically separate from the strain that caused the most deaths in the West African outbreak, but still share the characteristics of Ebola.

“We don't know what the next outbreak is going to be. … If it's one of these others that comes out of the woods, we don't really have anything in the cupboard” to treat it, Dye said.

Alternatively, a vaccine created with the research they've done in Uganda may protect against all the strains of Ebola.

Dye said he's hoping the vaccines or treatments that come from their research will be tested in Uganda.

A manufacturing plant in Frederick, which gets its marching orders through the National Institute of Allergy and Infectious Diseases, plans to make more doses of an experimental Ebola vaccine early next year, according to David A. Lindsay, a director at the plant.