Half a century ago, this soldier escaped armed captors in Africa. He’s still fighting for the recognition many say he’s due

In 1965, Ron Dolecki was on a map-making mission for the U.S. Army Corps of Engineers in Ethiopia when he and two crew members were ambushed by Eritrean rebels, taken captive, and marched 150 miles through the desert to Sudan 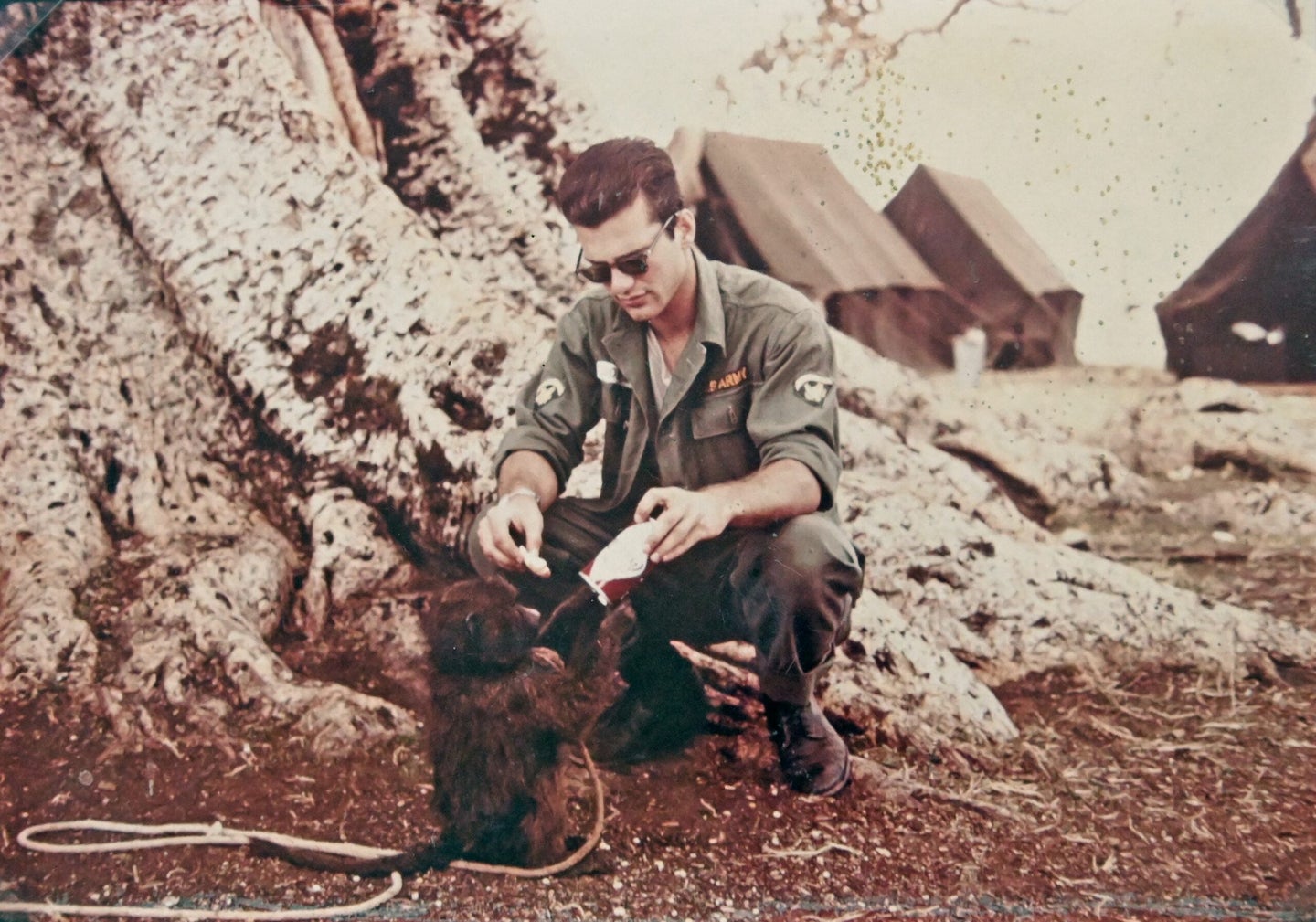 Veterans Day has always had special meaning for Ron Dolecki, even though it has long reminded him of a disappointment.

Years ago, Dolecki took part in a U.S. Army mission in Eastern Africa. He was ambushed and captured by armed guerrillas, forced to march more than 150 miles across a desert, and held in brutal conditions for two weeks, only to escape on foot, saving two crew mates in the process.

Historians call his saga the stuff of legend, and it helped Dolecki launch a career with the CIA. But his pride in his service has been mixed with exasperation.

Dolecki, 75, of Huntingtown in Calvert County, has spent 17 years seeking military recognition for his time in captivity. He has applied four times for the Prisoner of War Medal, an honor with complex criteria, broadly “awarded to any person who was taken prisoner or held captive … while engaged in military operations involving conflict with an opposing Armed Force.”

The Army has always said no — not because of a dispute over what he went through, but over how to characterize his captors. The POW Medal recognizes brave and honorable conduct on the part of captive soldiers, but the U.S. was not officially at war with the hostiles who took him prisoner.

Three U.S. senators, two battalion commanders and fellow vets have backed his cause. The Army responded for years that his case didn’t meet the criteria, most recently in a letter last month.

But on Monday, in response to repeated questions from The Baltimore Sun, an Army spokesman said Dolecki’s application has now been forwarded to the branch’s top official for review.

“The Secretary of the Army is reviewing archival documents … and eye witness accounts from others present throughout Mr. Dolecki’s experience … to make a decision on Mr. Dolecki’s eligibility for the Prisoner of War medal, as an authorized exception to policy,” Lt. Col. Gabriel J. Ramirez wrote in an email.

The only U.S. soldier known to have escaped from enemy captivity in Africa in the 1960s said he’ll wait to see what happens.

“I’m honored to have served, I’m glad our mission was successful, and those experiences made an indelible mark on my life,” he said. “But dealing with this bureaucratic inertia has been so frustrating I can’t begin to explain it.”

When Dolecki was still a skinny high school student in Oil City, Pennsylvania, his immigrant parents told him joining the Army would be a great way to cement his status as an American. He saw the idea as a ticket to adventure. Enlisting at 18, he volunteered for overseas duty. And for nearly two years, the plan worked like a charm.

Trained as a mapmaker, Dolecki was assigned to an operation to help Ethiopia, a key U.S. ally, create up-to-date diagrams of its 470,000 square miles. His job with the so-called Ethi-U.S. Mapping Mission was to travel to remote regions, often by helicopter, and document everything from the location of roads, creeks and wells to the widths of bridges.

Little was publicly known about the classified mission until 2014, when Joseph Kaufmann, a military historian, wrote a book on the 64th Topographic Engineer Battalion of the Corps of Engineers, Dolecki’s unit and the outfit that carried it out.

“These field parties ― often supported by aircraft — crossed deserts, mountains, and jungles, operating in areas that included everything from deadly snakes to lions and an array of diseases,” Kaufmann wrote.

Dolecki said he never dwelled on that. He soaked in the experience.

He traveled, sometimes on his own, to see and photograph wildlife. In a private memoir, he described the “lush, cool highlands of incredible beauty” that “could suddenly give way to baking deserts, where nothing seemed to live” and “escarpments with sheer drops of two thousand feet.”

“Who gets to explore Africa in a chopper and get paid for it?” he said recently. “I knew I’d never get another opportunity like that.”

On July 12, 1965, Dolecki and his crew — U.S. pilot Jack Kalmbach and a local interpreter — touched down in the remote northern highlands.

As he unpacked his gear, a barrage of machine-gun fire erupted from the surrounding foliage. Dozens of angry, gun-waving soldiers emerged. He remembers the yelling in a strange language; the guerrilla who nearly bashed the translator’s head in, only to be stopped by a superior; the shouts that his unit were spies, and the fireball as the rebels torched their chopper.

The men identified themselves as members of the Eritrean Liberation Front, an insurgency group fighting for independence from Ethiopia’s U.S.-backed government.

And so began a forced trek of 155 miles across the sweltering southeastern Sahara Desert and into Sudan.

Fifty-five years later, it’s still hard for Dolecki, a grandfather of four, to convey the extremity of the ordeal or explain how he survived it.

The rebels were jumpy, he recalled, as they prodded the three along, sometimes in heat that reached 125 degrees. Traveling mostly at night to avoid detection, they hid when search planes buzzed overhead.

Once they crossed into the friendlier Sudan, Dolecki said, the rebels relaxed. Their numbers shrank to six. That was when the crew hatched their plan.

Dolecki, the fittest of the three, was to wait for a lapse in the soldiers’ attention, sneak through bushes and into the desert, get as big a head start as possible before his absence was noticed, and make for the border some 25 miles away.

“He had absolutely nothing with him, including nothing to protect himself with,” said Kaufmann, who served for a time with the 64th. “And he had wild animals to worry about. Unless you have been in the field and surrounded by hyenas and hear their whooping noise, you don’t know how dangerous that can be.”

Dolecki recalled his saliva drying to “the consistency of paste,” which he tongued away to breathe. It took him two days, a faceoff with hyenas, and the help of a friendly tribesman whose tent he stumbled into one night, but he made it to a Sudanese border town. Police there connected him with authorities inside Ethiopia. He’d lost 15 pounds. His mates were released the next day.

For years, he was glad just to have survived. He was thankful at passing the battery of tests that got him hired by the CIA, where he worked as an interpreter of satellite photos. He and, Linda, his wife of 48 years, raised four children.

The Army turned them down.

To be sure, the awarding of medals is a subjective matter. Veterans by the thousands send in applications for such recognition, and officials must develop clear criteria by which to make judgments, military historian Joseph Balkoski said.

Count Balkoski among those not surprised that the Army’s Awards and Decorations Branch said no. Officials argued that the Eritrean Liberation Front ― an armed and uniformed insurgent force that opposed Ethiopian emperor Haile Selassie — was not directly at war with the United States, and that Dolecki’s captors were “bandits,” not soldiers.

While technically true, observers like Kaufmann say the reasoning is absurd.

“That’s like claiming the patriots who fought the British in the American Revolution were bandits, not belligerents,” he said.

Traas has said in letters to the Army that exceptions have been made to the “declared war” rule, including for the sailors of the U.S.S. Pueblo, a Navy warship captured and held by North Korea in 1968, and the military personnel among the 52 Americans taken hostage at the U.S. Embassy in Iran in 1979.

Dolecki grew progressively indignant at what he saw as the Army’s stubborn reliance on technicalities. He applied for reports on his case, a process he said took five years, and learned the details of the rescue operation mounted at the time.

Operation Drawplay, as the Army called it, involved more than 2,200 U.S. and Ethiopian soldiers and police, dozens of aircraft and a U.S. Army Special Forces team, and newly declassified cables among the State Department, Defense Department and White House reveal that the military knew of the violence of the rebels’ ambush.

U.S. Sen. Chris Van Hollen wrote the Army on Dolecki’s behalf in September as part of his latest application. The reply Van Hollen received — which again said ELF “was not considered an opposing armed force hostile to the United States” — did not please him.

“Bureaucratic red tape should not stand in the way of recognizing those who have served our nation,” the Maryland Democrat wrote in an email to The Baltimore Sun. “While I’m disappointed in the Army’s response, we will continue looking for a way forward.”

Such a way finally may be possible. All materials on Dolecki’s case have been forwarded to Army Secretary Ryan McCarthy, the only official empowered to authorize exceptions to the branch’s policy.

One factor in Dolecki’s favor: the U.S. Code was amended in 2013 to read that the POW Medal may be awarded, at the secretary’s discretion, to soldiers held captive under conditions “comparable to those … under which persons have generally been held captive by enemy forces during periods of armed conflict.”

Dolecki said he’s satisfied to have served, recognition or no, but told Monday of the Army’s statement, he said he’s “honored.” Still, his thoughts turned to his American former crew member, Kalmbach, who died years ago.

Dolecki believes Kalmbach, too, should be considered for the award.

“It would be a great honor if Jack and I were both recognized for our status as prisoners of a foreign army in a foreign land while serving our country in uniform,” he said.