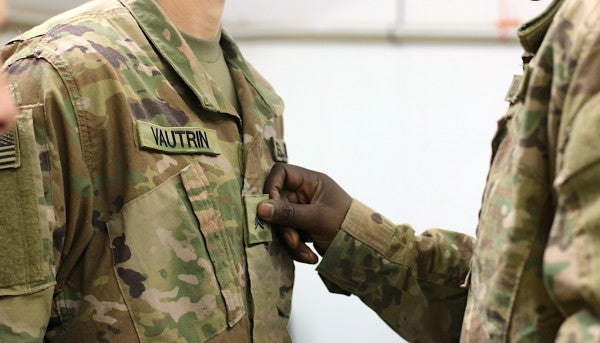 The U.S. Army is launching a new merit-based promotion system for enlisted personnel that will reward qualified soldiers with more rank but also force “subpar” sergeants out of the service if they fail to meet the new standards.

Personnel officials hope to have the improved promotion system fully operational by 2021, according to a recent news release, which describes how the service plans to post a 90-day forecast for all promotions — from sergeant to sergeant major.

Army Human Resources Command, or HRC, intends to announce the names of all soldiers picked for promotion “on the 15th of each month, with an effective promotion date on the first day of the following month,” the release states.

“This is the first major overhaul to our enlisted centralized promotion board in the 50 years we've conducted them,” Sergeant Major of the Army Dan Dailey said in the release. “This change now truly rewards the most qualified soldiers who are seeking advancement instead of simply promoting people based on seniority.”

However, if soldiers are rated as subpar “and are unable to become fully qualified in their rank,” they will be advised that their “continued service may be at risk,” the release states.

Once a soldier is found “not fully qualified” by a board a second time in the same grade, the Army will set a mandatory separation date six months in the future, according to the release.

“There is a place for everybody in the Army as long as you are performing,” retired Sgt. Maj. Gerald Purcell, personnel policy integrator for noncommissioned officer professional development with the Army G-1, said in the release.

“At the point when it is determined that you are not contributing to the team and essentially drawing a paycheck, then we're going to inform you that your service is at risk. If it continues … then we are going to tell you your tenure with the Army is over,” he continued.

Soldiers in this category who are eligible for retirement will be allowed to retire, Purcell added.

Under the current system, the Army assigns a “P” next to soldiers' ranks to indicate it is required to promote them. By 2021, the service will eliminate the “P” status for all NCO ranks E-6 and higher, the release states.

The current promotion system generates an order of merit list, or OML, which is used to select soldiers for promotion. After a soldier is selected, HRC assigns a promotion-sequence number, determined by the soldier's seniority — time in grade, time in service, and date of birth, Purcell said.

“If the best candidate happens to be sequence No. 400 out of 500, based on time and grade, that's not rewarding and recognizing talent,” he said in the release.

The transition to the new promotion system starts this fiscal year with the master sergeant promotion board, by changing how sequence numbers are informed by OML standings, Purcell said.

Under the new system, the Army plans to conduct annual reviews of the NCO corps and maintain an OML for each grade and military occupational specialty, or MOS, he said, adding that the OML will no longer be used to generate an annual promotion list.

Instead, the OML will evaluate the force and determine soldiers who are “fully qualified” for promotion. From there, the Army will employ a merit-based rating system to order the OML sequentially, the release states.

“The vast majority of the NCOs are, in fact, fully qualified to promote,” Purcell said. “Fully qualified is a retention standard; it's not about promotion.

“I could have an OML of a thousand individuals, and 990 could be fully qualified,” he added. “The promotion demand might be 40. In this case, the best 40 records … would be identified promotion.”

Soldiers will have access to their OML standing by grade, career progression and MOS through the Army Career Tracker website, Purcell said, adding that it should be available in the next few months.

“It will be a private and secure automated link from the Army to the individual, and no one else will have access to it,” he said. “Soldiers can go into the Army Career Tracker and can share that information with a mentor or a leader if they so choose, but they're not required.”

The new promotion system will also put more weight on the service's online Distributed Leaders Course (DLC), according to the release.

Currently, there is a Department of the Army policy to suspend promotion eligibility for specialists and sergeants who fail to complete this mandatory DLC training. By fiscal 2021, the service will expand that policy to all applicable ranks through master sergeant, according to the release.

“If you excel at what you do, we're going to promote you,” Purcell said in the release. “Everything is predicated on everybody doing what they're expected to do.”

SEE ALSO: The Army Has Actually Defined Its Deployability Requirements For The First Time