Within one second, the new eyewear will adjust to changing light. 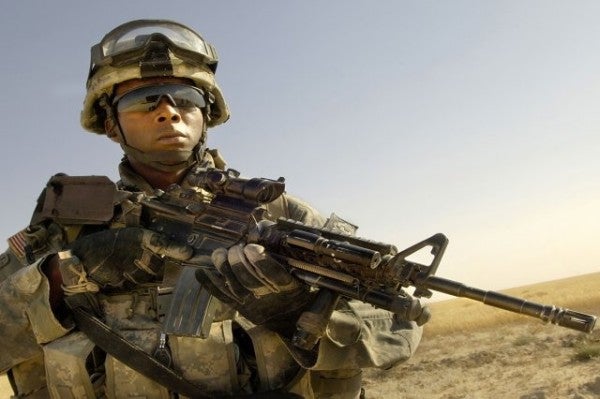 Army equipment officials have issued a reminder to soldiers that the service's authorized protective eyewear list is being updated regularly with high-tech options like lenses that adjust to changing light in the blink of an eye.

The Transition Combat Eye Protection lens features sensors with much greater sensitivity than commercial transitional lenses because they are designed to respond to visible light instead of UV rays, according to a recent Army press release.

“It's a one-second button,” Capt. Michael McCown, assistant product manager of Head Protection at Program Executive Office Soldier, said in the release. “It's not like your transition lenses that you get from your doctor that change as you go in and outdoors … it's electronic.”

The authorized protective eyewear list, or APEL, is updated about every two years and offers a wide range of brands and styles of protective sunglasses and goggles which feature the APEL logo. All of the 27 types of eyewear on the list have been through rigorous ballistic and non-ballistic testing at Aberdeen Proving Ground, Maryland, according to the release.

“We have seen some really horrific injuries with roadside bombs,” Whitehead said.

Facial injuries will still occur with authorized eyewear, but there is a chance the soldier's eyes will be protected, she said in the release.

“The soldier's face is all chewed up,” Whitehead said. “But when they pull his glasses off, where the skin is intact around their eyes, where you know without a doubt that eyewear saved their eyes.”

Soldiers can check out the Army's APEL
online and buy approved eyewear at most Army and Air Force Exchange Service stores.