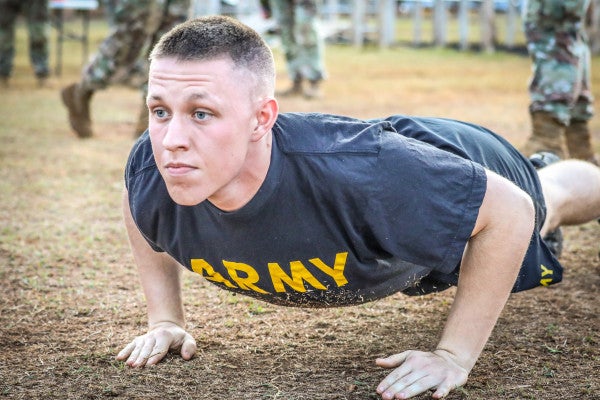 The Army recently published an update to its command policy that encourages sergeants to drop soldiers for push-ups or order extra physical training to correct minor screw-ups as an alternative to stiffer non-judicial punishments.

Last updated in 2014, the 213-page Army Regulation 600-20 is designed to offer command guidance for commanders across the Army includes updates to corrective training, sexual harassment reporting and extremist activity on social media, according to an Army release.

Leaders at all levels across the Army “have an obligation to know, enforce and take appropriate action in accordance with Army Command Policy,” Sgt. Major of the Army Michael Grinston said in the release.

“The changes empower NCOs to lean on non-punitive measures as a form of corrective training to address minor deficiencies,” Sgt. Maj. Jasmine Johnson, the command policy sergeant major, said in the release.

According to the regulation, “physical exercises are an acceptable form of corrective training for minor acts of indiscipline (for example, requiring the soldier to do push-ups for arriving late to formation), so long as it does not violate the Army's policies prohibiting hazing, bullying, and unlawful punishment.”

Nonpunitive corrective measures can include the denial of pass or other privileges or extra training. The regulation warns that leaders should monitor subordinates to make sure nonpunitive practices don't deteriorate into hazing.

One of the most effective nonpunitive corrective measures is extra training or instruction, according to the regulation.

“For example, if soldiers appear in an improper uniform, they are required to correct it immediately; if they do not maintain their government housing area properly, they must correct the deficiency in a timely manner,” the regulation states. “If soldiers have training deficiencies, they will be required to take extra training or instruction in subjects related to the shortcoming.”

Another update to the regulation requires commanders to notify their soldiers that they cannot possess a firearm or ammunition if they have a qualifying conviction of domestic violence, according to the release.

The change comes after a domestic violence working group years ago identified a gap in the previous AR 600-20, Lt. Col. Melissa Comiskey, chief of command policy for the Army's G-1 office, said in the release.

The regulation also expands the policy on extremist group activities by incorporating social media for the first time, as well as command options for violations under the Uniform Code of Military Justice.

“Social media was not addressed in the previous regulation,” Comiskey said. “Also, the requirement for commanders to notify either their [staff judge advocate] or [criminal investigation division] when there's any type of reports of extremist activities in their organization.”

The regulation includes numerous changes related to sexual assault/harassment policies. Policies from several Army and Defense Department directives have also been moved under the authority of the Army's Sexual Harassment/Assault Response and Prevention (SHARP) program.

The SHARP program is now responsible for sexual harassment complaints instead of the Military Equal Opportunity Office, Comiskey said.

Criteria for a sexual assault incident response oversight report as well as a commander's critical information requirement have been added as well too, the release states.

“The Army hopes to foster a culture of dignity, respect and inclusion,” Johnson said in the release. “It's a guide to ensure soldiers are being treated fairly, and commanders are able to maintain good order and discipline in their ranks.”