What Soldiers Really Think Of The New Army PT Test, According To Reddit

The new Army PT test is right around the corner, and every soldier with Internet access seems absolutely pumped. That’s... 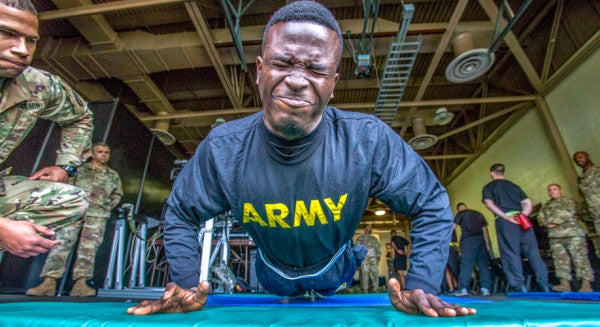 The new Army PT test is right around the corner, and every soldier with Internet access seems absolutely pumped.

That’s the gist of the 600 comment thread in the r/Army community on Reddit that blew up when the service dropped news of the new combat fitness test. No longer are ruminations of the troops confined to smoke pits or on-base pita pits; now, we get to hear the real feelings of real warfighters behind the beloved barricade of Internet anonymity.

To that end, decided to highlight the three best insights into new Army PT test from the nameless hordes of U.S. service members if only to really celebrate the evolution of bitching about stupid command changes in the information age.

The first comment that we loved highlights the potential for this new-fangled test to absolutely bite every seasoned NCO in the ass, as they haven’t thrown a medicine ball backward over their heads once during their three tours in Afghanistan.

The two-mile will never die

Bizarrely, the CFT kept the run portion intact, despite the fact that a two-mile run in gym shorts and go-fasts is completely antithetical the new test’s stated goal of actually reflecting the conditions of combat. Of course, the wars of the future may come down to a timed two-mile run in shorts — after you medicine ball the enemy bunker without looking that is.

Time to join a Crossfit box

Whatever stupid CrossFit wholesaler that is about to make bank off some silly deadlift equipment may have pulled the strings behind this momentous shift in fitness testing. Either that or maybe some general is just really, really into CrossFit. Nothing like doing some deadlifts in the box’ to really show who is the alpha in the group.

Here’s a bonus comment in my personal favorite retort in the thread, which perfectly exemplifies every reservist and national guardsman's reaction to the new combat fitness test.