Obstacles… Army Master Sgt. Cedric King has run into and stomped some of the worst. King tried and tried, failed... 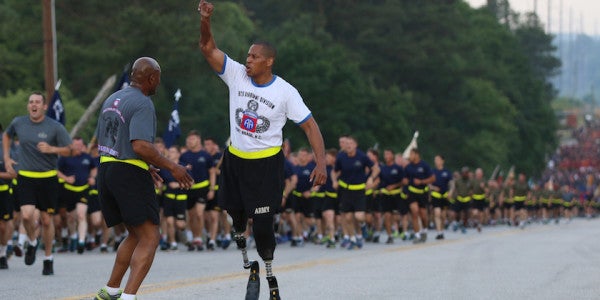 Army Master Sgt. Cedric King has run into and stomped some of the worst.

King tried and tried, failed and failed, to become an Army Ranger. Then became a Ranger.

King went on to serve in Afghanistan, two tours, the second being cut short July 25, 2012, when an improvised explosive device claimed both legs, caused major internal injuries, permanent loss to part of his right arm and hand, and ended a 20-year military career.

During recovery, King learning to use prosthetic legs – walk, and then run, a little, then a lot.

Twenty-one months after nearly dying, he completed the 26-mile Boston Marathon and has done tougher courses, including the 48.6-mile Disney Marathon series and the 70.3-mile half Ironman Triathlon.

At the same time King relearned to walk, he completed a college degree.

Related: 10 Powerful Photos That Will Change Your Mind About What It Means To Be An Athlete »

Beyond the degree, King became a motivational speaker, having encouraged public school students, NFL players and members of Fortune 500 companies to face challenges.

At the University of Central Missouri, King delivered the third annual Ike Skelton Lecture, the key event in the Servant Leadership Lecture Series, a joint initiative between UCM and Whiteman Air Force Base. Hundreds of personnel from Whiteman and students filled Hendrick Hall to hear his about experiences with persistence, standing up against adversity and viewing obstacles as opportunities.

Minutes before delivering the lecture Wednesday, King answered questions about his life.

QUESTION: In what kind of neighborhood do you grow up?

ANSWER: “I grew up in a very, very poor part of North Carolina. … The most important, the most successful people that I’ve grown up with, they graduated from high school and they came back to work at the local factory or work at the gas station. These guys were the guys that had their own trailer, their own yard, had riding lawn mowers. That was the definition of success.”

King said he did not think himself smart enough to risk his parents’ money on college and decided to join the Army to earn college money. The Army rewarded him for learning the basics.

“The basics: showing up on time, 100 percent effort, it was having a great attitude and pushing yourself, encouraging others. Those were the things that got you recognized. … It turned out that those were the things I needed to be successful outside the military, too.”

Sticking to the basics paid off after his 20 year military career: “I did wind up graduating college.”

“It was just, do your homework or write this paper. I was like, I could have done this all along.”

QUESTION: How have you adjusted to your new position as a role model and public speaker?

ANSWER: “In the military … you start at the bottom, with toothbrushes and toilets. You’re cleaning and swabbing the deck.”

Those at the bottom, if doing well the things asked of them, become leaders.

“Why are you leading others? Because you’ve led yourself well, and when you get good at leading a few people, then they give you more and more and more.”

Demonstrated ability helped him become a role model, he said.

King said as a leader he wanted to treat his soldiers like he wanted to be treated. He said he learned how not to act from bad leaders – from bullies, from people who abused their power and resources.

“By doing the things differently than the bad leaders did, it was like a whole ’nother reason for our guys to look up to me.”

King said he still hears from men he led.

“My birthday was three weeks ago and half of the birthday wishes were guys that I came across and led through combat or led in schools or taught.”

QUESTION: Did you channel the military discipline into your recovery?

ANSWER: “To become an Army Ranger, I had to fail so many times.”

Some people can go through Ranger or SEAL training the first time. King said he is not one of those people.

King said he learned each time he failed until he knew what to do to pass training.

“What Ranger school taught me was failure wasn’t final, it’s just part of the journey.”

In life, failure is common when trying something new, but sticking to the goal leads to completion.

“It’s a curriculum that we’re all in. This is life.”

QUESTION: Was there ever a moment in recovery when you wanted to give up?

ANSWER: “Every day, this morning.”

King said he ran a couple of miles earlier in the day and dealt with a two-year-old, bleeding, open sore, about the size of a half dollar. If he stopped running for a few weeks, the wound might heal, he said.

“I’m still am not willing to sit down for that long. … If I were to quit today, I’d be derailing some sort of opportunity later.”

King said the issue is not about him and his pain, but about people who watch what he does.

Those watching might want an excuse to quit college, to divorce, to give up on a difficult child, King said. He does not want to provide an excuse for them to give up rather than work through problems.

King gave the example of how he felt at the 17-mile marker while running the Boston Marathon. He said he entered a recovery tent to take off his prosthetic leg, and comforts and gracious people in the tent offered him every reason to stay.

“If you’re not dedicated to accomplishing your goal, you stay in there, because being in there is less painful than being out on the course.”

Another runner entered the tent, certain leg cramps meant he could not finish the last nine miles of the course.

King put on the leg in front of the man with leg cramps and limped back to the street to complete the course.

“I’m walking up the hill and he comes along. He’s like, ‘Dude, I was just about ready to dial my wife up and have her meet me. … But you get up and you hobble outside this tent. … And he takes off running.”

Later, King said, the man sent him a Facebook message, saying, “‘Because of you, I finished this marathon, the first one I’ve ever finished.’ People are waiting for you to just say, ‘I’m done.’ You don’t even know who they are. But because of your determination, you can help so many people out that you don’t even know.”

QUESTION: What do you want people to take away from hearing you speak?

ANSWER: “Obstacles aren’t here to kill us. They’re not. They’re here to help us. They’re our friend. It’s part of the curriculum. These challenges that we have in life, they’re just part of the course.”

Without testing for validity, no course, no degree, would have worth, and that is the same with life’s challenges, King said.

“Nobody respects a life without tests.”