At this point in American history, it’s generally understood that overbooking seats on commercial flights is a horrible feature of … Continued 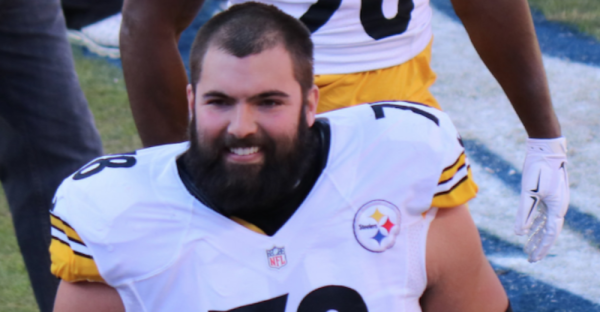 At this point in American history, it’s generally understood that overbooking seats on commercial flights is a horrible feature of the grossly incompetent U.S. airline industry. But not every seating crisis on a commercial flight has to end with a bloody face, social media outrage, and a shareholder loss of $800 million.

Alejandro Villanueva, a veteran turned NFL tackle for the Pittsburgh Steelers, gave up his seat on an overbooked connecting flight out of Boston so Pine-Richland High School student Maddie Hudak wouldn’t miss a trip to Spain with her classmates. And he did it for free, refusing compensation from the airline for his trouble, according to 247Sports.

Those familiar with Villanueva won’t be surprised by his act of kindness. A former Army Ranger captain, he served three tours in Afghanistan and received a Bronze Star before joining the Steelers in 2015.

Villanueva had previously made headlines in 2016 for his outspoken remarks about San Francisco 49er’s quarterback Colin Kaepernick and his choice to kneel during the national anthem.

“I agree that America is not perfect,” Villanueva told the Pittsburgh Post-Gazette at the time. “I agree there are lot of issues with minorities in this country, I agree we should do something about it. I don't know if the most effective way is to sit down when the national anthem of the country that is providing you freedom and providing you $60 million a year is the best way to do it when there are black minorities that are dying in Iraq and Afghanistan and protecting our freedom for less than $20,000 a year.”

Villanueva has earned praise both inside and outside of the Steelers family because of his dedication, respectful nature, and selflessness.

“I'm telling you, this guys has presidential qualities,” Steelers coach Mike Tomlin told 247Sports. “I'd vote for him. Given time, this guy is gonna master anything you put in front of him.”