There are about 41 Army Ranger survivors of World War II remaining from more than 7,000 who served, according to estimates 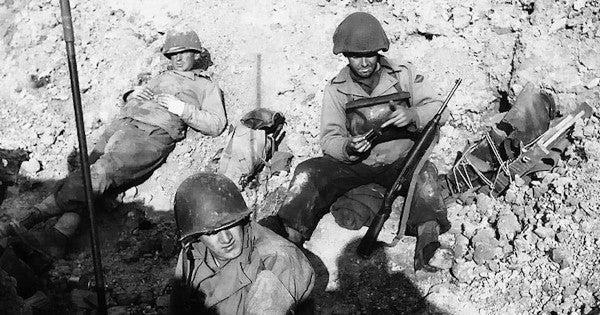 For one veteran who fought through the crossfires of German heavy machine guns in the D-Day landings, receiving a Congressional Gold Medal on behalf of his service and that of his World War II comrades would be “quite meaningful.”

Bills have been introduced in the House and Senate to award the Army Rangers of World War II the medal, the highest civilian award bestowed by the United States, along with the Presidential Medal of Freedom.

Retired Maj. Gen. John Raaen, 97, said in an interview Friday that the award, if approved, would come as a “final act of recognition” for the service of Rangers in all theaters of World War II, including the legendary “Boys of Pointe du Hoc.”

According to Raaen and former Army Capt. Ron Hudnell, whose father, James B. Hudnell, was a Ranger private first class at D-Day, there are about 41 Ranger survivors of World War II remaining from more than 7,000 who served.

The Congressional Gold Medal has been awarded more than 160 times in the past to individuals or groups “who have performed an achievement that has an impact on American history and culture that is likely to be recognized as a major achievement in the recipient's field long after the achievement.”

Last year, Sen. Joni Ernst, R-Iowa, an Army veteran, introduced a bill to award the medal to the Rangers, but time ran out before it could come to a vote.

This year, Ernst and Sen. Tammy Duckworth, D-Illinois, a severely wounded Army veteran, co-sponsored a similar bill that now has the support of 46 other senators.

“I'm often reminded of the unparalleled courage and sacrifice of the Greatest Generation,” Ernst said in a statement. “It's time we recognize the sacrifices and heroic actions of our brave Army Rangers.”

“The impact and influence of these elite soldiers and the sacrifices they made to protect their fellow Americans cannot be overstated,” Duckworth said.

He said the bill was intended to give the Rangers “the recognition they have long deserved. By enacting this bill, we're telling these veterans 'America will never forget,'” he said.

'Seize back the continent'

Hudnell, a West Point graduate and Vietnam veteran who earned the coveted Ranger tab during his Army service, has been working with other descendants of Army Rangers to lobby for Gold Medal recognition of the service of the 1st through 6th Ranger Battalions and the 29th Provisional Ranger Battalion in WWII.

The 6th Ranger Battalion led landings in the Pacific theater and most famously rescued 516 Allied prisoners in the legendary raid on the infamous Cabanatuan POW camp in the Philippines.

The 29th Provisional Ranger Battalion conducted raids on islands in the English Channel and on German installations in Norway.

Hudnell stressed the advanced age of the Ranger WWII veterans and said “we're trying to get this passed as fast as we can.”

He cited President Ronald Reagan's famous 1984 “Boys of Pointe du Hoc” speech on the 40th anniversary of the D-Day landings, given atop the rugged cliffs of the point commanding sweeping views of Omaha and Utah beaches, as possibly best epitomizing the Ranger elan.

On June 6, 1944, the Rangers' mission was “one of the most difficult and daring of the invasion: to climb these sheer and desolate cliffs and take out the enemy guns,” Reagan said. “Rangers looked up and saw the enemy soldiers at the edge of the cliffs, shooting down at them with machine guns and throwing grenades. And the American Rangers began to climb.”

“They shot rope ladders over the face of these cliffs and began to pull themselves up. When one Ranger fell, another would take his place. When one rope was cut, a Ranger would grab another and begin his climb again,” he continued. “Soon, one by one, the Rangers pulled themselves over the top, and in seizing the firm land at the top of these cliffs, they began to seize back the continent of Europe,” Reagan said.

John Raaen, while at West Point in 1942, said he saw an article in Life Magazine on the formation of the Rangers and said to himself, “You know, I've just got to be one of them.”

On D-Day, he was in a landing craft headed for shore under the initial plan that had his unit from the 2nd Battalion supporting the Pointe du Hoc mission: “We were supposed to fight our way to Pointe and attack it from the ground.”

Circumstances forced them to go to “Plan B” and a landing on Omaha Beach, where they immediately came under relentless fire from German MG42 heavy machine guns known as “Hitler's Buzz Saws,” Raaen said.

They were spared German artillery fire, which was mainly aimed at landing craft and ships offshore, he said, but “what concerned us was the very long range machine-gun fire, like a constant buzz: pop pop pop pop pop…”

They had protection, at least on the right flank, from large rock breakwaters on their section of the beach, and Rangers used Bangalore torpedo explosives to punch four holes in the barbed wire, he said.

The Rangers swarmed through the breaks in the wire and up the high bluffs inland of the beach, which were then engulfed in flame and smoke, making it difficult for the German gunners to see their approach, Raaen said.

“We took no fire from above us, which would have been devastating,” Raaen said. “They couldn't see us until we were on top of them,” adding that “the moment my battalion hit the high ground, Hitler was done.”

However, “We knew nothing” about what had happened to the Ranger assault on Pointe du Hoc until the second day, Raaen said.

There had been a call for naval gunfire on Pointe du Hoc, but the naval commander said “Hell no,” the Rangers had taken the position. He would fire in support of the Rangers but not on the point itself, Raaen said.

If the Gold Medal were to be awarded, Raaen, who went on to serve in Korea and Vietnam before retiring in 1979, said he hoped it would be an inspiration to the new generation of Rangers currently serving.

He described them as “bigger, stronger, faster than we ever were. They'd lick us in any battle except for one thing — we had a better rifle, the M-1.”