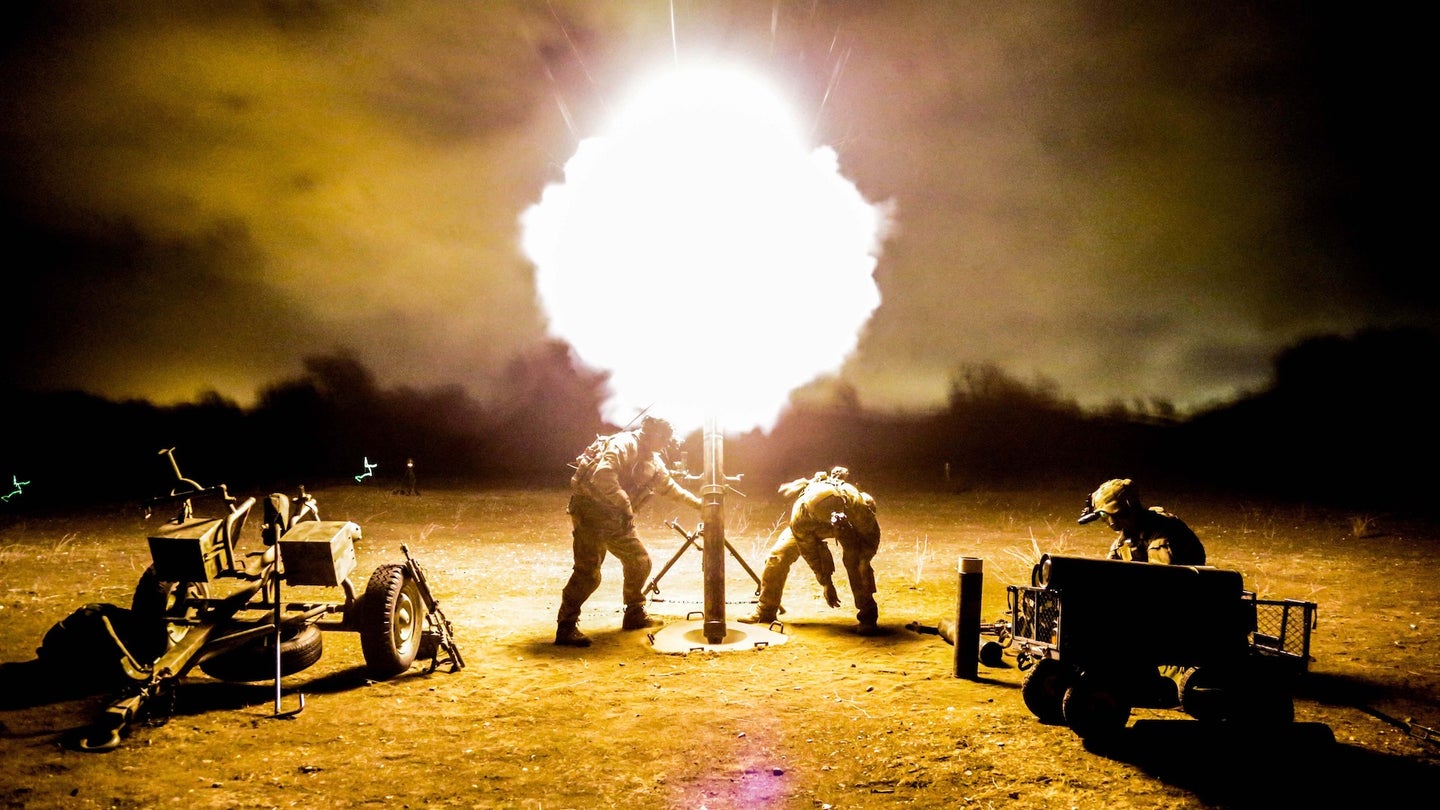 The Army’s most elite light infantry element is looking to improve its ability to deliver precision indirect fires and clear out before becoming an enemy target.

According to a request for information solicitation published on the government’s contracting website in December, the 75th Ranger Regiment needs “Ranger Fire Support System-Auto,” a 120mm or 81mm mobile mortar system that eliminates the need for soldiers to dismount and manually unload, fire rounds, and reload the mortar.

“With a shift toward contested operational environments, the ability to provide accurate first round fires and rapidly redeploy faster than is achievable with the current manual capability is a critical gap,” the solicitation reads.

The Army’s Rapid Capabilities and Critical Technologies Office is now inviting companies with ideas, prototypes, or ready-built solutions to meet this need while integrating the Army’s existing Ranger Fire Support System (RFSS) program. RFSS, which has been a program of record for about a decade, consists of two vehicles: a mortar carrier and an ammunition carrier, both based on the Polaris Ranger 6X6 all-terrain vehicle. The mortar carrier is outfitted to carry the Army’s 120mm mortar tube plus six mortar rounds; the ammunition carrier can haul another 24 rounds. Both can be transported underneath a CH-47 Chinook helicopter via a center-load cable.

Though the existing system allows for rapid insertion to a desired destination, the vehicles’ four-person crew must still disembark the vehicles to do all the work of firing the mortar. From emplacement to loading rounds to securing the mortar tube back on its carrier vehicle and driving off, the process takes about two minutes; but in a contested environment, against a peer enemy with sophisticated surveillance and counter-battery fire capabilities, that might not be enough.

The importance of extremely rapid “shoot and scoot” capabilities has been underscored by the artillery-heavy war in Ukraine, in which Ukrainians are defending themselves from Russian invaders. The best defense against long-range precision fires is to target and destroy the firing team before it can move to another location; Ukrainian troops have proved themselves adept at avoiding enemy counter-battery fire.

According to the RFI solicitation, the Army is looking for an automated solution that can fire a first round within one minute and 20 seconds. Its fire adjustment must also be faster, able to adjust 300 mils, the artillery directional units, within 15 seconds, and 1,000 miles within 30 seconds, according to the solicitation. The RFI suggests the Army would also be interested in a system that allowed for automatic target selection and retargeting adjustment after firing.

After firing, the system must be ready to move within two minutes. And the first round must have a circular error probable, or accuracy rate, of less than or equal to 25 meters at the maximum effective range, comparable to current Army mortar standards.

Ranger Fire Support System-Auto must also be compatible with the existing U.S. Fire Control System and capable of interfacing with the Android Tactical Assault Kit, used by the Army for mapping and communications.

The Army wants to keep close to the dimensions of its existing Ranger Fire Support system to ensure the vehicle or vehicles it procures will still be transportable by the CH-47 Chinook. The system must be able to carry four personnel and 26 high-explosive 120mm rounds, or 81mm equivalents, with a leftover payload capacity of 1,055 pounds after personnel and ammunition.

The RFI mentions that the Army is particularly interested in solutions that can combine existing Army mortar systems into the newly fielded Army Infantry Squad Vehicle, a nine-seater ATV based on the Chevrolet Colorado ZR2 platform. Selected by the Army in 2020 with fielding beginning in 2021, the vehicles are headed to the service’s 11 Infantry Brigade Combat Teams to support light, distributed operations.

The Rapid Capabilities and Critical Technologies Office is also interested in hearing from companies that can offer additional artillery capabilities that support the objective, including shoot-on-the-move, or being able to hang rounds without stopping and preparing; synchronized strike; improvements on precision and range over current mortar capabilities, at an affordable price; modular solutions that allow for interchangeability of transport vehicles; and fully remote operation, potentially reducing or eliminating the need for a crew.

While these last requests would require next-generation solutions, the concept of an automatic mortar built into a vehicle is far from new.

More than two decades ago, the Marine Corps field-tested a system based on the Rifled Recoiled Mounted Mortar, or 2R2M, a French-made 120mm mortar mounted on an armored personnel carrier that automated loading processes and could fire from its position on the vehicle.

The Marines called the concept Dragon Fire II and incorporated the mortar prototype, built into an LAV-25 Light Armored Vehicle into a series of experiments from 1999-2002, firing some 1,000 rounds with the system. Ultimately, though, the Corps pursued a less ambitious solution: a towed rifle 120mm mortar the service called the Expeditionary Fire Support System. Those entered service in 2019, but the Marine Corps announced plans to get rid of them in 2017 due to high costs and competing priorities.

The Army currently employs the CARDOM Autonomous 120mm/81mm recoiling mortar system, which can fit inside a larger armored personnel carrier and is meant to be incorporated into units at the battery, brigade, and battalion level. In 2020, the service agreed to begin a feasibility study for a version of the Nemo turreted remote-controlled 12mm smoothbore mortar system made by Finnish company Patria. This capability might at some point be built into Armored or Stryker Brigade Combat Teams. But a mounted, automated mortar system designed to be operated at the squad level still represents a unique capability.

Interested companies have until January 30 to respond to the Army’s RFI solicitation.