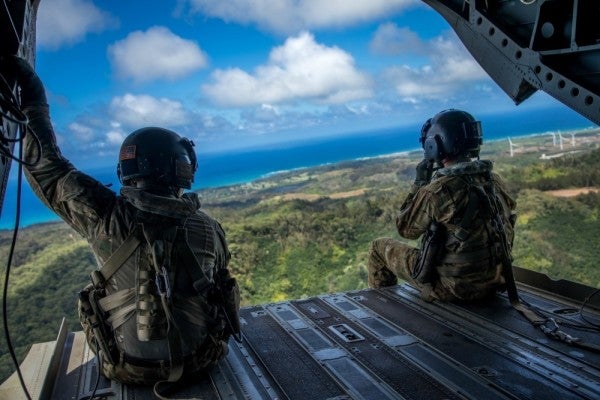 About a year from now, the Army plans to practice rapidly deploying 8,000 to 10,000 soldiers from the mainland through Western Pacific islands and into nations around the East and South China Seas for training that will send a message to China.

The first “Defender Pacific” — the Pentagon's most significant exercise for the region in 2020 — is expected to be followed by an even bigger version involving more than 10,000 mainland soldiers.

Gen. Robert Brown, who stepped down Friday as commander of U.S. Army Pacific at Fort Shafter, likes to point out that the United States is in a state of strategic “hyper-competition” with China and Russia.

Advanced missile systems —particularly those of China — have “changed the equation out here in the Pacific” and made it more difficult for U.S. forces to gain access to potentially contested environments in what's called “anti-access/area denial,” the four-star general said in an interview with the Honolulu Star-Advertiser.

China's road-mobile DF-21D “carrier killer” missile, for example, has a maneuverable warhead, a range exceeding 930 miles and the ability to target aircraft carrier strike groups in the Western Pacific.

The U.S. military is retooling for a potential high-end fight after years of counterinsurgency in Iraq and Afghanistan, and the Army will have not only its traditional land-based role, but a long-range missile mission to hit land targets and sink ships at sea.

The key to deterrence, and victory if warfare becomes necessary, is integration among all the service branches “where air, land, maritime, cyber and space all work together very closely” to rapidly take advantage of windows of opportunity, Brown said.

Over the past three years, dozens of simulations and war games have shown that “when we can work together in a joint (way), and all the domains truly integrate, we can defeat that” anti-access standoff capability, he said.

The Army has embraced the war-fighting concept — which it calls “multi-domain operations.” U.S. Indo-Pacific Command is working on a joint doctrine.

“It's been slowly coming (along), and we're really working on pulling it all together,” Brown said of multi­domain operations. “And if we do it right, it will lead to peace and a free and open Indo-Pacific, because nobody would be foolish enough to be aggressive and attack our nation, because they know they'd lose.”

There's competition in the Pacific “that's unlike anything I've seen,” said Brown, who has served in the Army for 38 years. “But competition does not need to be conflict.”

Brown stepped down and will be retiring after nearly 3-1/2 years in charge of U.S. Army Pacific and 106,000 active and Reserve soldiers and Army civilians.

Long-range firepower is the Army's No. 1 modernization priority, and the service is working on improving the range and lethality of artillery and missiles.

The Army, Navy and Air Force are developing hypersonic weapons that attain speeds of more than Mach 5, or five times the speed of sound — at least 3,800 mph — and have a range of 1,400 miles. The Army is expected to field a prototype by fiscal year 2023.

Brown likes to point out the Army could have a significant role in a future fight with its ability to operate from some of the 25,000 islands in the Western Pacific, firing missiles at ships in the littorals, or near-shore waters.

“If you can kill a ship from land, you can influence a lot of things,” including securing key choke-points in the South China Sea, Brown said.

The soldiers tapped for the fall 2020 Defender Pacific will deploy through what's referred to as the second and the first island chains to six to 10 Asia-Pacific nations, he said. “Scattered all around,” as Brown put it.

The first island chain draws a line from Japan and Taiwan through the Philippines. The second island chain is farther east and runs from Japan to the Mari­ana Islands, Guam and Palau. The People's Republic of China maintains the United States uses the island chains to encircle and contain China.

“This will be heading to exercises to get in the second and first island chains from CONUS (the continental U.S.),” Brown said. “So they can practice, how do they communicate? … How do they bring their equipment? How do they do all of that?”

The 30-day exercise will be held with the Navy and Air Force. Agreements with host nations are still taking shape, Brown said.

“We're in the very early stages. We've got verbal 'Hey, yes, we want to do it' — more interest than I could ever imagine,” Brown said. “Everyone is interested because the people want a chance to exercise with the best military in the world.”

The exercise will demonstrate the ability to bulk up the approximately 100,000 soldiers assigned to the theater in a hurry. The deployment will include a division headquarters and soldiers drawn from active-duty, National Guard and Army Reserve ranks.

“When you look at Defender Pacific, the idea is, you can talk about being rapidly deployable, being able to get to a fight,” Brown said, “but unless you do it, it's talk. You've got to practice it.”