An Army recruit contracted a flesh-eating disease, losing his leg in the process, and his family is blaming the care he received at Fort Benning in Georgia 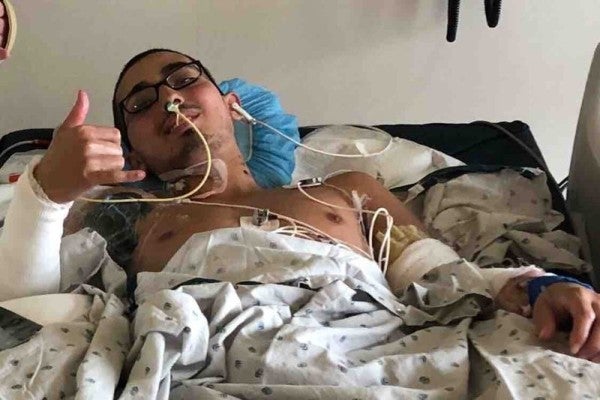 An Army recruit contracted a flesh-eating disease, losing his leg in the process, and his family is blaming the care he received at Fort Benning in Georgia.

Dez Del Barba, 21, enlisted in the California National Guard in late 2018. He was only six weeks into basic training at Fort Benning when he fell ill.

After a throat culture tested positive, he was rushed to a private hospital in Columbus, Ga., according to CBS Sacramento. Since mid-February, he has undergone over a dozen surgeries, one of which amputated his left leg above the knee. He was scheduled for his 16th surgery on Wednesday.

His condition is known as necrotizing fasciitis, which the Centers for Disease Control and Prevention (CDC) describe as “a rare bacterial infection that spreads quickly in the body and can cause death.” Group A Streptococcus is believed to be the most common cause of the infection, according to the CDC.

Del Barba has had a significant portion of tissue and muscle removed to help combat the infection. He has even undergone a skin-graft operation.

“It's the most heartbreaking feeling a parent can feel. My son's life has been forever altered and his future as a soldier for the United States Army has been destroyed by pure negligence,” Del Barba's father, Mark Del Barba, said in a statement.

Mark maintains his son received poor medical care at Fort Benning — including a delay on being alerted to the positive test.

“All they had to do was look at his lab results,” Mark told News 3, “It was hand-written in medical records: 'Positive for culture. Call AM Monday.'”

Del Barba will use a prosthetic leg and then begin physical therapy, CBS Sacramento reports.

Del Barba's family has established a Facebook page, Dez's Recovery Journey, where they have been keeping track of his day-to-day updates beginning Feb. 24.

The majority of the postings update the public on Del Barba's condition, even some milestones he's reached since everything unfolded.

“Another successful surgery today,” says a post from February 27. “The surgery lasted about 4.5 hrs and the doctors are confident that the work done today prepares [Dez] for his road to recovery. The surgeons performed an autograft, which is taking the skin from the host and placing it on the open wound.”

“Dez was moved to a wheel chair and he was brought to the rehabilitation gym,” a post from March 10 reads.

“Today was another miraculous day for Dez!” a subsequent post said. “As Dez's health improves he gets little perks that go along with it. Today's reward was that Dez was able to spend about 15 minutes outside; he felt the cool breeze and just relaxed enjoying the fresh air, something he hasn't been able to do for the past month.”

They posted a petition on March 17 which is intended “to help and protect soldiers like Dez and all our military service members who have been affected by military medical negligence.”

In a statement, Fort Benning officials said soldiers' care was an “utmost concern.

“Sometimes the environment or high-risk training results in illness, injury, or sadly, even death,” the statement continued.