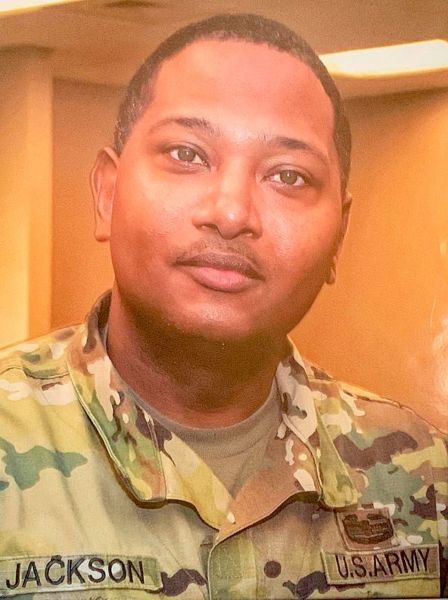 Dianna Jackson’s life was forever changed in the most horrific of ways on Jan. 8, 2020.

The 55-year-old Birmingham mother lost her only living child – who was also her best friend – when he was gunned down in an apparent ambush in the garage of Dianna’s Killough Spring Road home.

“This is still a tremendous shock for the entire family,’’ said Dianna. “We cannot believe he is gone.”

Still-grieving and desperate for answers, Dianna spoke Thursday for the first time publicly since the slaying of her 36-year-old son. She is offering a $10,000 cash reward for information that leads to the arrest and conviction for the person or people responsible for Tristian’s death.

The deadly shooting happened just before 9:30 p.m. at Dianna’s east Birmingham home between Five Mile Road and Orchid Lane. Tristian, who had custody of his daughter, picked her up after school and again after gymnastics and headed to Birmingham from Montgomery where he was an Army recruiter.

On the way to his mother’s house, Tristian picked up his mother’s sister and her grandbaby. When they got to the Killough Springs Road home, he unloaded their bags and was about to shower. Before doing so, however, he decided to move his car into the garage.

His aunt heard him pull in the car and then she heard “pop, pop, pop,’’ she would later tell family members. “She said she didn’t realize what it was. Evelyn went toward the kitchen and she saw her dad laying on the floor,’’ Dianna said. “She said, ‘Auntie, my daddy broke his soda.’ But it was his blood. That’s when my sister said she realized what had happened and she grabbed the kids and ran to the back room and called 911.”

Dianna’s sister called her and got no answer. She immediately called again. “She said you need to get home,’’ and that’s just what Dianna did. As she drove down Five Mile Road and neared her neighborhood, she saw a sea of blue police lights.

“When I got to the corner, I heard my son’s voice that said, ‘Y’all tell my momma that I’m OK.’ So, when I turned the corner, I had a sigh of relief because I heard my son say, ‘I’m OK,’’’ Dianna said. “But as I parked my car and jumped out…the police officers grabbed me and wouldn’t let me come in and wouldn’t tell me anything. I realized then what happened to my baby.”

She tried to see Tristian, but police held her back, and told her to wait. “This went on until my family members walked up and that’s when they told me,’’ Dianna said. “I remember I broke down and I just kept saying, ‘Please let me see my baby,’ and they kept telling me ‘You don’t want to see him like that’’’ she said. “I needed to see my son, but they never would let me.”

That was Wednesday night, and it had been three days since Dianna had last seen her son. “We went to church, we ate dinner, we hugged, and they went home,’’ she said. “He called me to let me know they had made it home and I had made it home. We both said, ‘I love you.’’’

“We talked every day and we FaceTimed that day when he took Evelyn to gymnastics, but the last time I physically hugged my child was that Sunday,’’ she said.

Tristian’s service was held Jan. 24 at Maxwell Air Force Base’s Faith Chapel. He was later buried in Arlington National Cemetery. The Fairfield High Preparatory School graduated in 2001 and went straight into the Army as a military police soldier. He was deployed to Iraq in 2004 and stayed there for one year. It was during that deployment that Tristian earned the Combat Action Badge and was recognized for his actions during Operation Phantom Fury combat operations in Fallujah.

In 2006, he was reassigned to Germany. After several more assignment changes, Tristian in 2012 became a Detailed Army Recruiter, which became his passion. He received multiple awards for his service and was posthumously awarded the Meritorious Service Medal and the Gold Recruiter Badge. At the time of his death, he was starting to plan his retirement.

“From the time he was about 5 years old, my aunt always called him my little husband,’’ Dianna said. “He was a mama’s boy.”

“He’s always been smart, always wanted to do something to try to make a dollar,’’ she said.

As a single mother working two jobs, Dianna taught her boys at a young age to become self-sufficient. As young as elementary school, Tristian was so good at ironing that his uncle would pay him to press his jeans. And, Dianna said, after school and homework, Tristian would hang out at the neighborhood store where the owner eventually put him to work. He was probably no more than 8 years old when he was behind the register. “I can’t remember her name, but she said, I’ve never seen a child this young who could count back money like your son can,’’’ Dianna recalled.

She said she is stunned the case appears to be at a standstill. That’s why she is offering the reward money. A GoFundMe was launched by Tristian’s friends to help raise money for the reward.

“I’m asking, I’m begging, I’m pleading to anyone with information to please come forward,’’ she said. “I stay up nightly just replaying stuff in my mind, just trying to think. My son’s life was taking care of Evelyn. His job, his daughter, his mom, his family – that’s what he was all about.”

She absolutely believes can be solved. “I have my thoughts, as do everybody,’’ she said. “We just got to prove it.”

Evelyn is now with her mother, who also is in the military, and they live out of state. Dianna hasn’t seen her granddaughter in person since Arlington. “She misses her daddy, and she misses me,’’ she said.

Dianna lost her other son, Charles, to illness in 2007. “And now somebody took my baby from me,’’ she said. “My fight everyday to keep going without my child is to find who killed my baby. That was my son, my baby, my best friend. And I was his.”