The Army is planning a massive summer recruiting drive

As nationwide unemployment figures reach record highs, the Army is offering career-seekers an opportunity to be all they can be. 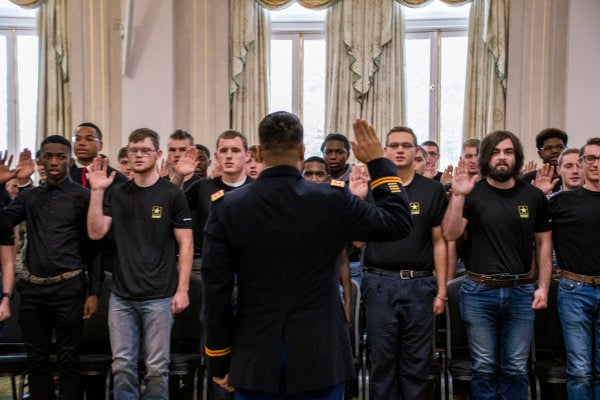 As nationwide unemployment figures reach record highs, the Army is offering career-seekers an opportunity to be all they can be.

The U.S. Army plans to launch a major recruiting drive between June 30 and July 2. The initiative, called Army National Hiring Days, was reportedly pitched to the Army’s service secretary and chief of staff earlier this month. It will begin shortly after the storied military branch celebrates its 245th birthday on June 14.

According to the Army Times, the push to beef up the number of soldiers in uniform follows a springtime of low recruitment, brought about by the coronavirus pandemic lockdown.

“We are engaging in the ‘Focus 22’ and we’re driving our message for people to either go into the recruiting stations or go to GoArmy.com,” Army recruiting commander Maj. Gen. Frank M. Muth told the military site.

Muth, whose spearheading the drive, said the “22” refers to the number of cities the initiative tends to target. Those cities include New York, Boston, Chicago and Seattle, which have a large Gen Z population that might not ordinarily consider military careers.

He intends to communicate that while up to 20% of the Army is boots on the ground and planes in the air, “a larger portion is the tech, and the help, and the engineers and the logistics.”

Military brass would utilize tools including Zoom and Microsoft Teams to reach potential recruits. Traditional recruiting efforts have focused on the South and Midwest.

Enlistment had reportedly been strong before the pandemic shutdown recruiting stations and forced the process onto the internet. The Army had signed up 2,200 more recruits by March 2020, matching the total for the same time frame in 2019. Recruiters now find themselves roughly 4,000 contracts short of their projected goal.

The nation’s soaring unemployment numbers could play to the advantage of the military, according to the Army Times, which says Army retention is about 15% higher than expected right now.

Muth feels the Army National Hiring Days event could be an indicator as to how much confidence young people have in the job market’s odds of bouncing back. Times of high unemployment reportedly make military service a more tempting option for some.

“I think we’ll … have an indication by mid-July, beginning of August if things really start to change,” he said.

Related: No, having COVID-19 doesn't disqualify you from joining the military