A major general with the Army Reserve died Friday after he collapsed during physical fitness training Friday at Fort Bragg,... 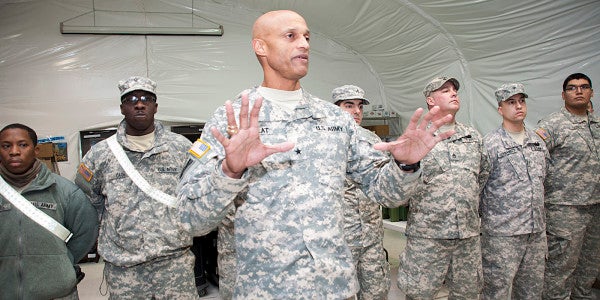 A major general with the Army Reserve died Friday after he collapsed during physical fitness training Friday at Fort Bragg, officials say.

Maj. Gen. Francisco Espaillat, 56, received his second star less than two weeks ago and had recently been selected to be the next chief of staff for the U.S. Army Reserve Command at Fort Bragg.

In a statement released Saturday, Lt. Gen. Charles D. Luckey, chief of the Army Reserve and commanding general of the U.S. Army Reserve Command, said, “Just last month I had the privilege of promoting him in a low-key ceremony at my office in Washington, D.C.”

“This was just his style, as a soldier he was humble, never seeking recognition. He was a splendid soldier who embodied leadership, energy and a relentless spirit of execution in everything he did,” the general said.

Espaillat received his commission in 1982, according to the Army Times. The New York City native was most recently in command of the 143 Expeditionary Sustainment Command based in Orlando, Florida. He also served as deputy commander for the 1st Theater Sustainment Command.

Army officials are investigating the cause of death.