The U.S. Army has mobilized 1,275 Reserve medical specialists to reinforce civilian hospitals in areas of the country that are struggling to handle novel coronavirus cases 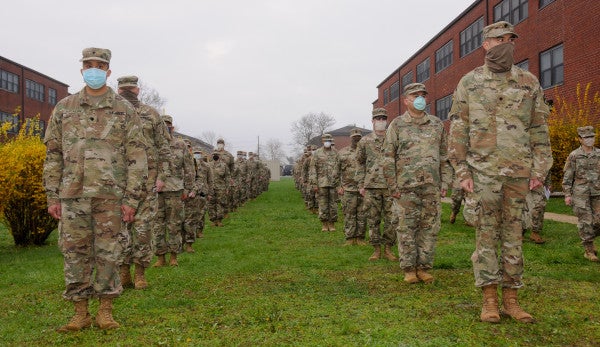 The U.S. Army has mobilized 1,275 Reserve medical specialists to reinforce civilian hospitals in areas of the country that are struggling to handle novel coronavirus cases.

The 15 Urban Augmentation Medical Task Forces each have 85 soldiers capable of providing the same service as a 250-bed hospital, according to a recent service announcement.

The Army vetted all Reserve volunteers to make sure they were not already supporting hospitals in their own communities, Army Chief of Staff Gen. James McConville said in the release.

“We did not want to take medical personnel out of civilian communities where they were actually fighting the virus,” he said. “We knew that there was going to be a lot of demand for medical professionals. … We put together these 15 Urban Augmentation Medical Task Forces, and they are motivated and ready to go.”

Each task force has 14 physicians, including an infectious disease specialist and four respiratory specialists, according to the release. Each also has 16 medics, 13 nurses, five physician assistants, two dentists, four pharmacists, two clinical psychologists, a psychiatrist, two occupational therapy specialists, four dieticians and other supporting staff to perform low-triage care, as well as test for COVID-19.

The task forces have deployed to Joint Base McGuire-Dix-Lakehurst, New Jersey, before moving on to their assigned hospitals. Four task forces will help in New York City, three are going to hospitals in New Jersey and another one will go to Connecticut, according to the release.

The remaining seven task forces are on standby and can be ready to travel within 24 hours, McConville said in the release.

About 29,000 Air and Army National Guard troops have deployed across the U.S. and its territories in support of the COVID-19 response.

Guardsmen have built mobile COVID-19 test sites to relieve some of the burden of screening emergency room patients for coronavirus at treatment facilities in Miami and Chicago, Army Secretary Ryan McCarthy said in the release, adding that the test sites will be able to process thousands of screenings at a faster rate.

“What it does if you go from the screening to the recovery point and the health care continuum, it helps create an arm's reach in the screening … instead of overrunning an emergency room with hundreds of people, which then presents the challenge for healthcare professionals to not getting sick,” McCarthy said.

“So, by going to the [test site], you can have many of these people get diagnosed, they get prescriptions and they go home, as opposed to overwhelming emergency rooms.”