Army reservist was charged for shooting tire of truck she believed would run her over. A jury acquitted her in 40 minutes

A jury quickly found Schitara Page not guilty of misdemeanor discharge of a firearm. 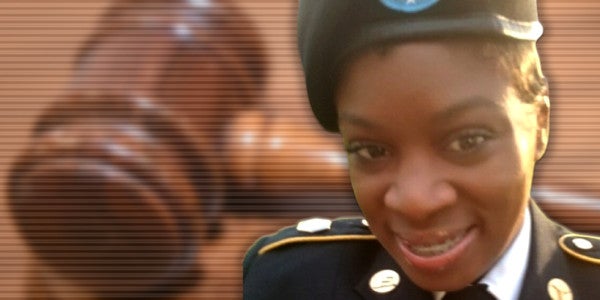 MARTINEZ — Schitara Page was working the night shift at her security guard job last Dec. 18, when she caught two shoplifters in the act. One punched her in the face and threw lemons at her as she followed them into the parking lot, she would later recall.

Page, a 32-year-old sergeant in the U.S. Army and expert marksman, caught up with the suspects as they were climbing into a pickup truck with large tires. The driver allegedly gave her one final taunt before climbing in, yelling out, “I've got something for you, b—-,” Page says.

She interpreted his comment as an imminent threat, and when the truck's wheels began to turn forward, Page drew her pistol and fired three times into one of the tires. The bullets flattened the tire, and the truck pulled out, heading away from Page.

It was something Page had never done before — not in her nine years in the Army, which included tours in combat zones, and not several days earlier, when a sedan struck her in a similar encounter, and she rolled over its hood rather than respond with force.

The decision to shoot drastically changed the next year of her life, resulting in criminal charges — not against the men in the truck, but Page.

She was arrested on suspicion of felony negligent discharge of a firearm, but charged with a misdemeanor version of the charge.

Her weeklong trial was earlier this month.

Jurors hardly sat down before they agreed that Page should be acquitted. A not guilty verdict was announced after less than 40 minutes of deliberations.

In an interview after the trial, Page called the whole experience “devastating,” despite the outcome in her favor.

“I'm still pretty devastated, because, honestly I've tried to live my life helping other people and living the best kind of life that I can,” Page said. “It's kind of a slap in the face, to do what I've done in my lifetime and someone accused me of a crime.”

Page testified during her trial, her attorney arguing it was an example of “perfect self-defense,” and citing California's “Stand Your Ground” law, which allows a person to use deadly force based on a “reasonable belief” that their life is in danger. Following the verdict, the Contra Costa County District Attorney put out a brief statement saying the shooting was “over disputed lemons and crab meat.”

“The shooting transpired in the parking lot of shopping center with civilians and children present,” the district attorney's statement says. “The chosen response appeared to be a disproportionate use of force. This jury decided otherwise.”

Page is a single mother living in Sacramento, who recently earned a master's degree and plans to soon attend law school. She became an army reservist after leg injuries forced her off active duty, but began moonlighting as an armed security guard in the Bay Area to pay for tuition. Had she been convicted, Page was unlikely to face much jail time because of her background, but she said it would have ruined her life.

“All my careers would have ended. Anything I worked for in the military would have gone away; I wouldn't be able to attend law school,” she said. “Plus the fact that I'm a single mom and if something happens to me, my child has nowhere to go.”

The night of the shooting, Page said, started out normally. She was working at a grocery store in Richmond, Foods Co., where she was employed through a security company. She noticed two men acting suspiciously, and approached them as they began to leave the store. They responded by yelling profanities at her.

Page followed them outside, a practice that was in line with her security guard training. After they climbed into the truck, Page believed she was in for a repeat of the attack days earlier, when she had actually been struck by a vehicle.

“My first thought was of not coming home to my child,” she testified.

She would later describe to police the split-second calculations she made before firing, how she was confident the bullets would flatten the tire but fail to penetrate all the way through, preventing a ricochet. She said that because of her leg injuries and being “5 foot, 3½,” she was unable to roll over the hood of the truck, as she had done before with a sedan.

“I would never jeopardize myself, but I would hate to have to take a life,” Page said. “If there's a way to stop something from happening to me without taking a life, that's the route I would take.”

The truck pulled out of the space away from her. Police later arrested the men, who were attempting to drive away on three tires. But prosecutors declined to charge them, and instead subpoenaed them as witnesses. They ducked the subpoena and did not testify, Page's attorney Joseph Tully said.

As officers responded to the shooting, Page secured her pistol in the trunk of her car, assisted police in picking up shell casings and gave a detailed description of the suspects. An officer took her statement, an experience she said was “frustrating.”

“I know when some people look at me, it's just a little black girl with a gun. It's hard to convey to people: I'm not just a security guard, I've been there, I know what I'm doing,” Page said. “I do feel like I have to tiptoe around police officers all the time, but in my city, I feel like the officers know me and it's not an issue.”

Page remained employed as a security guard the entire time the charges were pending.

After trial, Page's attorney, Tully, questioned why the case was filed in the first place, adding that he thought a police officer would “maybe be placed on leave” for doing the same thing.

“First of all, I don't think a police officer would have shot out a tire, I think a police officer is more likely to shoot at the car, that's the news reports I've seen,” Tully said. He later added: “(Page) has got a great life and a great career ahead of her. And know that sometimes you have to fight for justice; it doesn't come naturally to us by the system.”
———
©2019 the San Jose Mercury News (San Jose, Calif.)
Visit the San Jose Mercury News (San Jose, Calif.) at www.mercurynews.com
Distributed by Tribune Content Agency, LLC.