The U.S. Army Research Lab recently paired a human soldier with a battlefield robot in the first real-world demonstration of how robots can give American troops the edge in a 21st century fight 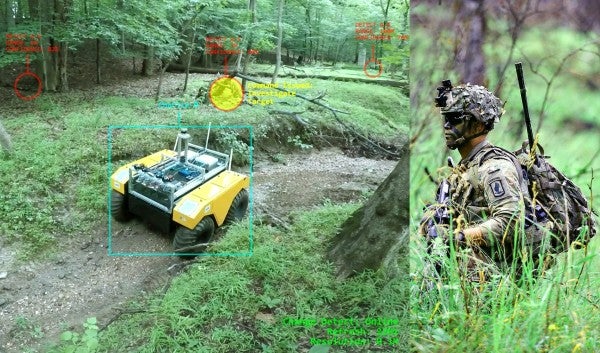 The U.S. Army Research Lab recently paired a human Soldier with a battlefield robot in the first real-world demonstration of how robots can give American troops the edge in a 21st century fight.

The new Army robot being tested as a sort of battle-buddy can sense small changes in a soldier’s environment that may indicate a threat. Those subtle changes are then relayed to the soldier’s eye glasses, using state-of-the-art augmented reality to display the information in a quick and easily digestible way.

“This could let robots inform their soldier teammates of changes in the environment that might be overlooked by or not perceptible to the soldier, giving them increased situational awareness and offset from potential adversaries,” said Dr. Christopher Reardon, a researcher at the U.S. Army Combat Capabilities Development Command’s Army Research Laboratory.

“This could detect anything from camouflaged enemy soldiers to IEDs.”

The idea behind the Army’s newest robot is pretty simple. Researchers took a small, autonomous ground robot and equipped it with a variety of (LIDAR) laser-ranging sensors. Using those sensors, the robot is able to build a virtual representation of the environment the robot and soldier occupy. That baseline environment is then constantly compared to the real-time data flowing through the robot’s sensors. When something in the environment changes, the robot identifies the change and transmits the data to the soldier’s glasses, where the changes are visible in a 3D augmented reality view of the environment.

“Incorporating mixed reality into soldiers’ eye protection is inevitable,” Reardon said. “This research aims to fill gaps by incorporating useful information from robot teammates into the soldier-worn visual augmentation ecosystem, while simultaneously making the robots better teammates to the soldier.”

In other words, the nearby robot is constantly scanning the area, and when something changes — whether it’s a nearby enemy combatant adjusting his footing or moving the leaves on a bush — that change is highlighted visibly in the soldier’s field of view (thanks to the system glasses). This will allow troops to immediately identify hidden threats in their environment.

This robot is a part of the broader Army Artificial Intelligence for Mobility and Maneuver Essential Research Program, which seeks to better equip artificial intelligence systems with contextual awareness of its surroundings — particularly as they pertain to maneuverability. By combining such a sensor system with an AI equipped robot, the robot could choose its own path over difficult terrain. Many current robotic systems, including Boston Dynamic’s ever-popular “Spot,” need to be manually put on different settings when traversing a loose, rocky hill, as opposed to a flat bit of field.

In a further bit of good news, the Army team running the experiment swapped out the sensor loads on the robot to test the efficacy of the system using higher and lower resolution sensors, and found that human operators were still able to discern environmental changes fed through the augmented reality glasses while using even low-resolution sensors. That realization means that these robot battle buddies could be produced with low-cost, low-resolution sensors that are not only more cost-effective, but can reduce the computational power (and in turn, battery requirements) of these systems as they explore ways to leverage them in combat.

It may be some time before we start seeing the U.S. Army deploy soldiers with AI-enabled robots, but it seems more clear than ever that AI will play an active role in the combat operations of the 21st century. Last week, a U.S. Air Force fighter pilot lost five straight dogfights to an AI pilot developed by Heron Systems, and just recently, Australia unveiled their first “Loyal Wingman” drone that is intended to accompany manned fighter jets into combat once complete.

Russia and China have both boasted development of their own infantry support robots in recent years. Russia’s, known as the Uran-9, is a larger tracked vehicle that, despite its fanfare, went on to grossly underperform while deployed to Syria. China opted instead to develop a flying quad-copter drone intended for use in urban environments for infantry support, thanks to its quick maneuverability and standard rocket payload.

The Army’s own robot AI initiatives are both benefitting from this soldier/robot pairing, as it offers vital information about how robots and humans might interact on the battlefield, while also bolstering efforts to improve the autonomy of these robots so they serve as more of an asset than a potential liability on the battlefield. It seems likely that human beings will always play an essential part of warfare, whether in the skies or on the ground; but AI will be along for the ride, every step of the way.