The Army just wrapped up its first robot combat vehicle experiment. Here’s what it learned

U.S. Army modernization officials are about to finish the service's first experiment to see whether the Robotic Combat Vehicle effort can make units more deadly on the future battlefield 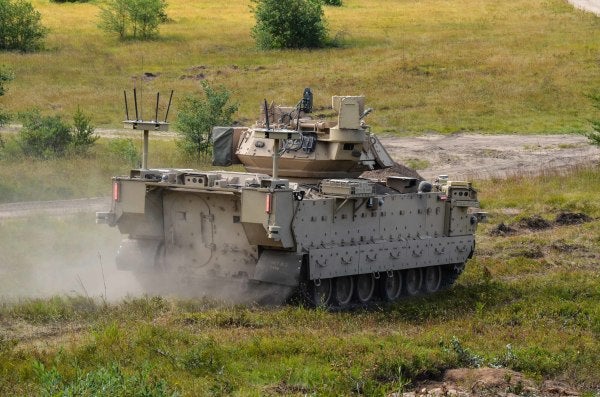 U.S. Army modernization officials are about to finish the service's first experiment to see whether the Robotic Combat Vehicle effort can make units more deadly on the future battlefield.

The platoon has operated in the rugged terrain of Fort Carson, Colorado, testing different technologies to control the robotic vehicles, sending them out hundreds of meters ahead to scout for enemy positions.

“This experiment was 100% successful … because we learned; the whole purpose was to learn where the technology is now and how we think we want to fight with it in the future,” Brig. Gen. Ross Coffman, director of the Army's Next Generation Combat Vehicle-Cross Functional Team, told defense reporters Thursday during a virtual roundtable discussion.

“All of the technology was not successful; it's a sliding scale. Some knocked our socks off, and some — we've got a little bit of work to do.”

The experiment, scheduled to end Aug. 14, is one of three designed to evaluate the performance and potential of robotic combat vehicles on the battlefield, Coffman said.

Some of the technology tested in the experiment worked better than anticipated, he added.

“The interface with the crew … so the soldiers see where they are, they see where the robots are, they can communicate graphics … it just absolutely blew us away,” he said. “The software between the robotic vehicle and the control vehicle — while not perfect — performed better than we thought it would.”

There were challenges with the target recognition technology that links the robotic vehicle with the control vehicle.

“It works while stationary, but part of the challenge is how do you do that on the move and how that is passed to the gunner,” Coffman said. “We've got some work to do with that.

“We have some work to do with the stability systems with the weapon systems as you are going across terrain,” he continued.

Another challenge will be to get the control vehicle and the robot vehicle to communicate adequately beyond 1,000 meters.

“The distance between the robot and the controller is a physics problem and, when you talk flat earth, you can go over a kilometer from the controller to the robot,” Coffman said, adding that potential adversaries are wrestling with the same challenge.

Several defense firms participating in the experiment have “created radio waveforms to get us the megabytes per second to extend that range” in dense forest terrain, he said.

“That's the hardest part, is you get into a dense forest, it's really hard to extend the range,” he said. “We tested them; we went after them with [electronic warfare] … so we have a really good idea of what is the realm of the possible.”

After the experiment, an independent evaluation will be conducted on the technical and tactical performance of the robots to decide whether manned-unmanned teaming in combat vehicles can make combat units more effective, Coffman said.

After each of these experiments, the Army will decide “is the technology where we thought it would be, should we continue to spend money on this effort or should we cease effort?” Coffman said.

The service is also scheduled to make a decision in fiscal 2023 on when manned-unmanned teaming with RCVs will become a program of record, he said, adding that no decision has been made on when the Army will equip its first unit with the technology.

Coffman admits that the technology is “not 100% there yet,” but he remains confident that combat leaders will one day have the option to send unmanned combat vehicles into danger before committing soldiers to the fight.

“This is about soldiers and this is about commanders on the battlefield and giving them the decision space and reducing the risk of our men and women when we go into the nastiest places on Earth,” he explained.