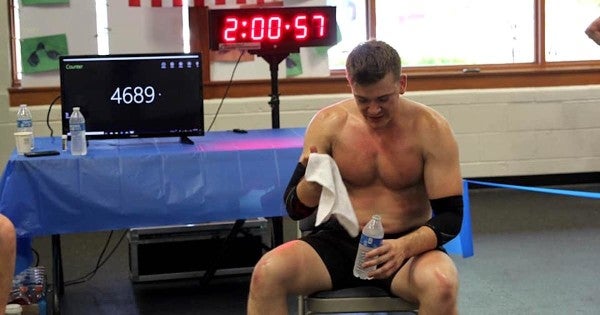 MILFORD, MI — An Army ROTC cadet from Michigan broke the Guinness world record for most chest-to-ground burpees completed in 12 hours Sunday as part of an effort to raise money and awareness for active and retired soldiers and their families.

Bryan Abell, 23, completed 4,689 burpees — an exercise that requires you to start from a standing position, go to a squat, kick your legs out, take your chest to the ground, push up and then return to a standing position — to break the record.

ICYMI: Bryan Abell from Michigan breaks the Guinness World Record for the most burpees in one day with 4,689 burpees in 12 hours pic.twitter.com/a1iBtWcfbr

Abell did the feat as a way to raise money for the Stronger Warrior Foundation, a non profit he founded with his sister Katelyn. According to the foundation's website, the mission is to provide help to those who have or are actively serving and their families through financial, physical and mental support.

Abell hoped to raise $4,500 but according to WXYZ Detroit, they raised $1,300. Abell completed the 4,689 chest-to-ground burpees at Carl's Family YMCA in Milford.

The entire 12 hours of the challenge was scheduled to be stream on Facebook, but the video does not appear on the foundation's page as advertised. A 22-minute clip of the final few attempts can be seen here.

The Guinness website has not officially recognized the feat as of Monday afternoon, but it appears the results were being certified Sunday during the live stream.