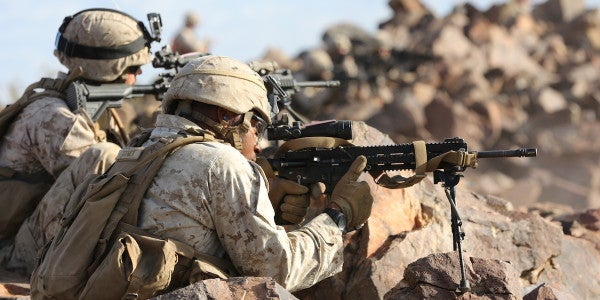 Preliminary results of an Army test to see how the service's M855A1 5.56mm round performs in Marine Corps weapons show that the enhanced performance round causes reliability and durability problems in the Marine M27 Infantry Automatic Rifle, service officials say.

The Marine Corps in March added the M27 and the M16A4 rifles to the Army's ongoing testing of M855A1 Enhanced Performance Round at Aberdeen Proving Ground in Maryland after lawmakers questioned why the Army and the Marines use two different types of 5.56mm ammunition.

“One of the reasons we were doing that test was because of congressional language from last year that said 'you two services need to look at getting to a common round,' so we heard Congress loud and clear last year,” Col. Michael Manning, program manager for the Marine Corps Infantry Weapon Systems, told Military.com in a Dec. 15 Interview.

Lawmakers again expressed concern this year in the final joint version of the Fiscal 2017 National Defense Appropriations Act, which includes a provision requiring the secretary of defense to submit a report to the House and Senate Armed Services Committees explaining why the two services are using different types of 5.56 mm ammunition.

Congress has approved the provision, but the bill is awaiting President Barack Obama's signature. The report must be submitted within 180 days after enactment of the legislation, which includes the entire defense budget for the coming year.

If the secretary of defense does not determine that an “emergency” requires the Army and Marine Corps to use the two different types of rifle ammo, they must begin using a common 5.56mm round within a year after the bill is passed, it states.

“The 2017 NDAA language doesn't surprise us; we kind of figured they were going to say that,” Manning said.

The Marine Corps still uses the M855 but since 2009 has also relied heavily upon the MK 318, a 5.56mm round that's popular in the special operations community.

The Army's M855A1 test, which involves the service's M4 and M4A1 carbines and the Marine M16A4 and M27, is still ongoing and Marine officials are expecting a final test report in the April-May 2017 timeframe, Manning said.

Preliminary findings of the test show that the Army's M855A1 round meets all the requirements for a 5.56mm general purpose round in Army weapon systems, “but does not meet the system reliability requirement when fired from the USMC M27 Infantry Automatic Rifle,” Army spokesman Lt. Col. Jesse Stalder said in a Dec. 16 email.

The Marine Corps began fielding the M27 in 2010 to replace the M249 squad automatic weapon in infantry squads.

The M27, made by Heckler & Koch, is a version of the German gun-maker's HK 416, an M4-style weapon that used a piston gas system instead of the direct gas impingement system found on the M4 and M16A4.

The Marines like it so much that the service is considering making it the next service rifle for infantry battalions in the Corps.

“In testing the Army states there was a reliability issue; that is true,” Chris Woodburn, deputy branch chief for the Marine Corps' Maneuver Branch that deals with requirements, told Military.com in a Dec. 20 telephone interview.

“In this case, it appears the stoppages that we were seeing were primarily magazine-related in terms of how the magazine was feeding the round into the weapon,” he said. “We don't know that for sure, but it looks that way.”

After further testing, Woodburn said the Marines have found a solution in the Magpul PMAG, a highly-reliable polymer magazine that has seen extensive combat use in Iraq and Afghanistan.

“It appears we have found a magazine that takes care of the reliability issues,” Woodburn said.

Marine Corps Systems Command on Monday released a message which authorizes the PMAG magazine for use in the M27, the M16A4 and M4 carbines, Woodburn said.

“The reason they did that is because when Marines are deploying forward, they are sometimes receiving M855A1, and we need to ensure they have the ability to shoot that round,” Woodburn said.

“In terms of the cause analysis and failure analysis, that has not been done, but what we do know is that the PMAG works,” he said.

“Where it still appears that we still have an issue with it is it appears to degrade the durability,” Woodburn said. “Durability is mean rounds between essential function failures, so you are talking bolt-part failures, barrel failures and the like.

“It is a hotter round and we think, that may be contributing to it, but we won't know for sure until the testing is complete,” he said.

In 2008, the Marine Corps came out with a requirement for a new 5.56mm round that would penetrate battlefield barriers such as car windshields with our losing performance better than the older M855 round, Marine officials maintain.

The service had planned to field an earlier version of the Army's M855A1 until the program suffered a major setback in August 2009, when testing revealed that the earlier, bismuth-tin slug design proved to be sensitive to heat which affected the trajectory or intended flight path.

The Army quickly redesigned the M855A1 with its current solid copper slug, but the the setback prompted Marine officials to stay with the current M855 round as well as start using the MK 318 Special Operations Science and Technology, or SOST, round developed by U.S. Special Operations Command instead.

The MK 318 bullet weighs 62 grains and has a lead core with a solid copper shank. It uses an open-tip match round design common with sniper ammunition. It stays on target through windshields and car doors better than conventional M855 ammo, Marine officials maintain.

The MK 318 and the Army's M855A1 “were developed years ago; they both were developed for a specific requirement capability separate and aside from each other,” Manning said. “The bottom line is both of these rounds are very good rounds.”

Both the Army and the Marine Corps “would like to get to a common round,” Manning added.

The Army, however, maintains that it is “committed to the M855A1” round and so far has produced more than one billion rounds of the ammunition, Stalder said.

“It provides vastly superior performance across each target set at an extremely affordable cost and eliminates up to 2,000 tons of lead that would otherwise be deposited annually onto our training bases,” Stalder said. “More than 1.6B rounds have been produced and reports on combat effectiveness have been overwhelmingly positive.”