The U.S. Army has announced that it plans to strike deals with QinetiQ North America and Textron Systems to build versions of the Robotic Combat Vehicle (RCV) 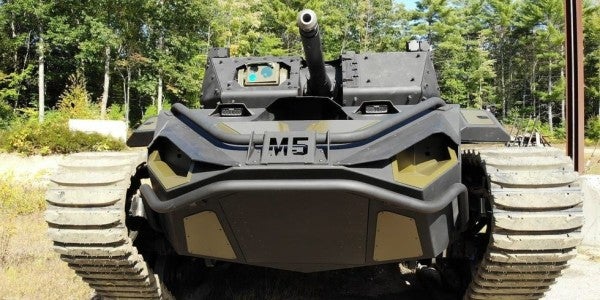 The U.S. Army has announced that it plans to strike deals with QinetiQ North America and Textron Systems to build versions of the Robotic Combat Vehicle (RCV).

The Army often uses OTAs under its new acquisition reform strategy, so it can have prototypes built quickly for experimenting with new designs.

If all goes well in upcoming negotiations, the service intends to award the final OTAs for both variants by mid-February, the release states.

The prototype RCVs will be used as part of the Army's “Robotic Campaign of Learning” in an effort to “determine the feasibility of integrating unmanned vehicles into ground combat operations,” the release adds.

The RCV effort is part of the Army's sweeping modernization effort, launched in 2017. The service wants to develop light, medium and heavy version of the RCV to give commanders the option of sending unmanned vehicles into combat against enemy forces.

“Robots have the potential to revolutionize the way we conduct ground combat operations,” Brig. Gen. Ross Coffman, director of the Next-Generation Combat Vehicle cross-functional team, said in the release. “Whether that's giving increased firepower to a dismounted patrol, breaching an enemy fighting position, or providing reconnaissance, we envision these vehicles providing commanders more time and space for decisions and reducing risk to soldiers.”

The results of the experiments, along with the findings from several virtual experiments, will “inform a decision by the Army on how to proceed” with robotic combat vehicles in 2023, according to the release.

Textron, along with its subsidiaries Howe and Howe Technologies and FLiR Systems Inc., displayed the Ripsaw M5 unmanned tracked vehicle as its RCV in October at the Association of the United States Army's annual meeting. QinetiQ North America teamed up with Pratt and Miller Defense to enter its Expeditionary Modular Autonomous Vehicle (EMAV) at AUSA as well.

Jeffrey Langhout, director of the Ground Vehicle Systems Center, applauded the selection of QinetiQ North America and Textron as a “testament to the dedication and passion of the Army to giving our soldiers the best capabilities possible.”

“This is a great day for our Army, as we make another important step in learning how we can employ robotic vehicles into our future formations,” he said in the release.