Brig. Gen. Laura Yeager will assume command of the California National Guard's 40th Infantry Division during a June 29 ceremony at the Joint Forces Training Base at Los Alamitos, California 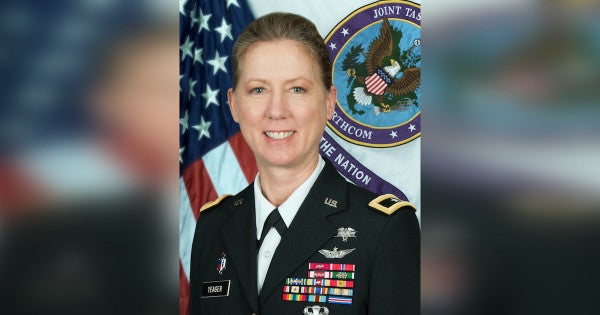 The U.S. Army National Guard has selected the first female officer to command an infantry division, marking another milestone for women serving in combat units.

Brig. Gen. Laura Yeager will assume command of the California National Guard's 40th Infantry Division during a June 29 ceremony at the Joint Forces Training Base at Los Alamitos, California, according to a National Guard news release.

Yeager will take command from Maj. Gen. Mark Malanka, who is retiring, according to the release.

The 40th Infantry Division was formed in 1917 and participated in World War I, World War II and the Korean War. More recently, 40th ID soldiers have deployedto Kosovo, Afghanistan, Iraq and numerous other locations around the globe, the release states.

In March, the division headquarters returned to U.S. soil after completing a train, advise and assist mission in Afghanistan, according to the release.

Yeager began her active-duty military service in May 1986, receiving her commission as a second lieutenant from the Reserve Officer Training Corps at California State University Long Beach, the release states.

She completed military helicopter training in 1989 and served as a UH-60 Black Hawk helicopter aeromedical evacuation pilot. She left active duty after eight years when her son was born but later continued her military career in the California Army National Guard, the release adds.

In 2011, Yeager deployed to Iraq as the deputy commander of the California Guard's 40th Combat Aviation Brigade, according to the release.

She has also served as commander of 3rd Battalion, 140th Aviation Regiment, and the 40th Combat Aviation Brigade.

Later in December of that year, then-Defense Secretary Ash Carter ordered the services to open all direct-action combat occupations to women.

Since then, more than 1,000 female soldiers have moved into combat-arms jobs previously reserved for male soldiers. As of late May, 80 female officers are assigned to infantry or armor positions at Forts Bliss and Hood, Texas; Fort Bragg, North Carolina; Fort Carson, Colorado; and Fort Campbell, Kentucky.