Craig Lang, 29, is one of two Army veterans implicated in the 2018 murder of a Florida couple. Lang and several other connected soldiers are part of a growing number veterans and U.S.-based extremists and white supremacist groups who have cultivated ties with Ukrainian right-wing groups in recent years 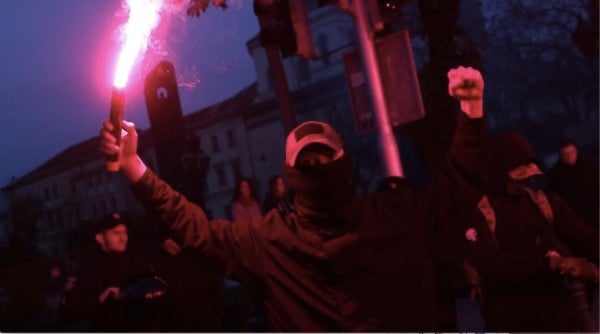 A former U.S. Army soldier who fought for a far-right Ukrainian paramilitary group and who has been linked to a bomb plot in the United States has been detained in Ukraine on charges related to a double murder last year.

Craig Lang, 29, is one of two Army veterans implicated in the 2018 murder of a couple, according to a criminal complaint filed in U.S. District Court in Florida, where the killing occurred.

The case is one of a growing number involving former U.S. veterans and U.S.-based extremists and white supremacist groups who have cultivated ties with Ukrainian right-wing groups in recent years.

Lang, who was being held in a jail in central Ukraine as of September 26, has also been linked to another U.S. soldier who was arrested on September 21 in Kansas, and who had asked Lang for help with traveling to Ukraine to fight for another right-wing paramilitary group.

That soldier, Jarrett William Smith, is expected to make an initial court appearance in a Kansas federal court on September 26.

According to the Florida criminal complaint, Lang and another former U.S. Army soldier, Alex Zwiefelhofer, were accused of robbing the Florida couple in 2018 and then killing them in an effort to get money to travel to Venezuela to “participate in an armed conflict against the Bolivarian Republic of Venezuela.”

The complaint said in September 2016, as Zwiefelhofer was returning to the United States, that he told agents from the FBI and U.S. Customs that he and Lang had fought in Ukraine with a group called Right Sector.

Originally an alliance of ultranationalist groups that formed during the Euromaidan protests in November 2013, Right Sector transformed into a volunteer fighting battalion after Russia fomented a separatist war in eastern Ukraine in April 2014.

The unit quickly earned a reputation for being unruly as they fought alongside Ukrainian government forces. The unit eventually split in two, with one half brought under control of the Defense Ministry, and the other remaining an unofficial, volunteer group.

Zwiefelhofer and Lang later traveled to Kenya, where they sought to fight an Al-Qaeda-linked terrorist group Al-Shabab, but they were detained there and deported back to the United States.

The former soldiers were already on the radar of U.S. investigators after they were detained by Kenyan authorities trying to enter South Sudan in 2017, according to the complaint.

The Florida complaint said Lang and Zwiefelhofer faced charges including conspiracy to commit violence, but not actual murder charges in the 2018 slaying of the couple in Florida.

The complaint, which was unsealed earlier this month in a Florida federal court, said Zwiefelhofer was being held in a Wisconsin detention center while Lang was in Ukraine.

Ihor Skritsky, the uncle of Lang's Ukrainian girlfriend in Kyiv, who is aiding the American, told RFE/RL that, as of September 26, Lang was in a jail and awaiting a court hearing in the central Ukrainian city of Vinnitsya.

Skritsky said that Lang has spoken to him about the murder case in Florida “but he denies any involvement.”

Mamuka Mamulashvili, who commanded a group of pro-Kyiv foreign fighters in the Georgian National Legion and is in touch with Skritsky and Lang's partner, said that Ukrainian border guards detained the American as he was returning from Moldova sometime in the past several weeks.

He told RFE/RL that border guards had held Lang due to an international warrant. Mamulashvili said that, after leaving Right Sector, Lang joined his legion of foreign fighters. He called Lang “a very good specialist.

“He was not with us for long, but as a soldier I can't say anything bad about him,” he said.

Mamulashvili said that he was unaware of Lang's trouble with Ukrainian and U.S. law enforcement. He said that, before fighting with him in eastern Ukraine, the Ukrainian Security Service performed a background check on him.

“They didn't see anything wrong with the guy,” Mamulashvili said of the service, known as the SBU. “He was on a [Ukrainian military] contract.”

The SBU did not immediately respond to a request for comment.

Lang's name also appeared in the criminal complaint filed in Kansas earlier this week against Smith.

According to those charging documents, Smith, a 24-year old who had been stationed at a nearby army base, discussed on Facebook in 2016 and later dates that he was interested in traveling to Ukraine to fight with the Azov Battalion, another paramilitary unit that has fought against Russia-backed separatists and also espouses an ultranationalist ideology.

That complaint said Smith corresponded with Lang, as Smith sought help in traveling to Ukraine.

In one conversation dated June 23, 2016, Smith wrote: “No former military experience, but if I cannot find a slot in Ukraine by October I'll be going into the Army … To fight is what I want to do. I'm willing to listen, learn, and train. But to work on firearms is fine by me too.”

According to the complaint, Lang responded, “Alright, I'll forward you over to the guy that screens people he'll most likely add you soon[ … ] Also as a pre-warning if you come to this unit and the government comes to shut down the unit you will be asked to fight. You may also be asked to kill certain people who become on the bad graces of certain groups.”

Smith also allegedly described how to build a bomb that could be triggered using a cell phone. He also allegedly suggested building a car bomb and targeting an unnamed U.S. news network.

The issue of U.S. white-supremacist organizations being drawn to Ukrainian groups is a concern that was raised by U.S. law enforcement as recently as 2017.

That year, the FBI warned that Azov's military wing is “believed to have participated in training and radicalizing United States-based white supremacy organizations.” The statement came as part of a case against a California man who traveled to the Ukrainian capital, Kyiv, to participate in a fight club with Ukrainian ultranationalists.

Hosting fight clubs is part of Azov's outreach to likeminded organizations in the West, as RFE/RL reported in 2018

The political wing, called National Corps, was founded by the former commander of the Azov Battalion, Andriy Biletsky. It has been labeled by the U.S. State Department as a “nationalist hate group.”