A female National Guard soldier has successfully completed the final stage of the Army's Special Forces Qualification Course (Q Course), but she's not a Green Beret yet 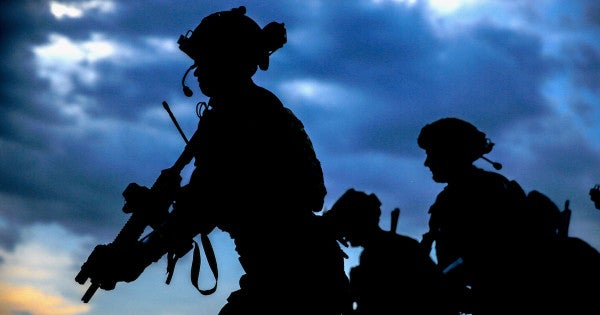 A female National Guard soldier has successfully completed the final stage of the Army's Special Forces Qualification Course (Q Course), but she's not a Green Beret yet.

The soldier finished the grueling three-week evaluation known as Robin Sage this week, but she is still in the final counseling phase, in which she and other students receive evaluations from course staff, Lt. Col. Loren Bymer, spokesman for U.S. Army Special Operations Command, told Military.com on Thursday.

“She is not a graduate yet,” Bymer said. “She is still a student in the course, and until she graduates, she is not a Green Beret.”

It's unclear when the counseling phase will be complete.

The current female candidate is not the only woman, however, to have made it this far in Green Beret training. Then-Capt. Kathleen Wilder previously made it through the Q Course in the 1980s, but was not allowed to graduate with the rest of the students, Bymer said.

SOFREP recently reported that the female soldier had completed Robin Sage and made history by completing Special Forces training.

USASOC would not provide any details about the soldier's identity.

“We do not release information about Special Forces candidates or recent graduates due to operational and personal security reasons,” Bymer said.

Becoming the first female to don the coveted green beret would be a major milestone for women breaking into ground combat roles previously reserved for male soldiers. Former Defense Secretary Leon Panetta started the process by lifting the ban on women serving in combat roles in 2013.

Robin Sage, the culminating field exercise of the course, drops soldiers into a fictional setting at Camp Mackall, North Carolina, that focuses on unconventional warfare.

Students are formed into 12-member operational detachment alphas (ODA) and serve in roles such as weapons, communications, intelligence, engineer and medical specialists.

They have to apply skills in guerrilla warfare, mission analysis and planning, and rapport building as they link up with friendly foreign forces and train them to fight against an unfriendly government.