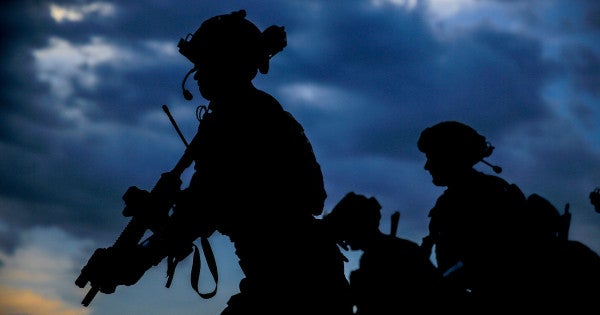 “Alienation-of-affection” is the legal term for instances in which someone outside a marital relationship breaks up the marriage.

The verdict came down just before 5 p.m. Monday, lawyers said, following roughly an hour of deliberations at the end of a five-day trial.

Elizabeth Clark said Monday evening that she nearly fainted as the jury said it had sided with her and the monetary awards were announced.

The first figure announced was $1 million.

“I was kind of confused at first,” she said.

She looked at one of her lawyers, José Coker. He was calm, she said. So she looked to her left at Adam Clark and Barrett at the defense table just a few yards away.

“And Kim was bawling or starting to bawl,” Elizabeth Clark said. “It hit me.”

She described hyperventilating and getting light-headed and laying her head on the table.

Elizabeth Clark's case said that she and Adam Clark, who is assigned to thee 3rd Special Forces Group at Fort Bragg, had been married since April 2010. They had two children together. She alleged that he began an affair with Barrett in 2016, when Adam Clark was temporarily working at Fort Belvoir, Virginia.

Lawyer Michael Porter contended to the jury in closing arguments on Monday that Barrett, recently divorced and over age 40, wanted to start a family. She began her relationship with Adam Clark to make that happen, Porter said, and stole him away from Elizabeth Clark.

The evidence included sexting between Adam Clark and Barrett prior, in which he sent a sexually explicit video of himself, Porter said.

Barrett, a physician, has since come to Fort Bragg and practices at Womack Army Medical Center. Adam Clark has fathered a child with Barrett via invitro fertilization, Porter said.

Some of the other allegations in the case:

Barrett and Adam Clark's lawyers argued that there was little evidence that Elizabeth Clark had been harmed by the pictures and comments. They also said there was a lack of direct evidence that the topless photo was shared to Kik. There was evidence a version of it with her naked breast partly covered with a star was shared to Facebook.

Elizabeth Clark said the money, should she receive it, will help her take care of her children, particularly her 5-year-old son who is severely disabled with autism. She also hopes to further her education to provide a better life for her family.

“I did believe I was going to win because I knew what I was telling was the truth,” she said. “And I know my story, and I knew what I lived through every single day and still to this day, and what I'm going to continue to live through.”

Adam Clark has a misdemeanor charges of stalking and cyberstalking pending against him in Cumberland County District Court in connection with these allegations. Coker said Barrett testified she is being investigated by the military for adultery, which is a crime in the military, using her position to influence childcare and accessing the medical records of the Elizabeth Clark and her children.