Maj. Gen. Sidney Shachnow survived three years in a Nazi concentration camp, he deployed twice to the jungles of Vietnam... 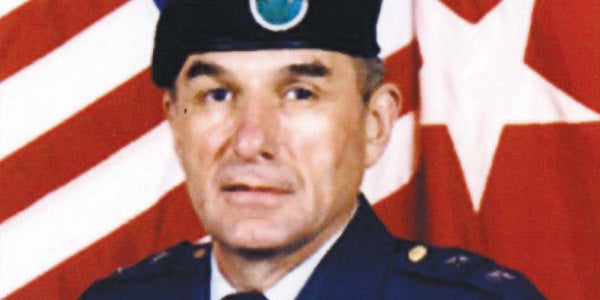 Maj. Gen. Sidney Shachnow survived three years in a Nazi concentration camp, he deployed twice to the jungles of Vietnam and he was the top U.S. Army officer in Berlin at the end of the Cold War.

Along the way, the general became a legendary Special Forces officer, revered by many in the close-knit community of Green Berets.

Maj. Gen. Shachnow, 83, who lived in Southern Pines with his wife, Arlene, died Friday. But his legacy, officials said, will live on.

Born in Lithuania in 1934, Maj. Gen. Shachnow faced oppression in his homeland and found his calling in the U.S. Army after immigrating to America in 1950.

He enlisted in the military in 1955 and served for more than 39 years, including 32 in the Special Forces community.

“Maj. Gen. Sidney Shachnow truly lived the American dream,” said officials at the Special Warfare Center and School, which the general commanded from 1991 until his retirement in 1994. “He came up through the ranks from private to major general through hard work and selfless service to this nation and the men and women under his command.”

“Even in retirement, Maj. Gen. Shachnow remained committed to the Special Forces Regiment, serving in a variety of volunteer roles and serving on a number of boards,” officials said. “He continued to provide sage guidance and sound counsel to commanders throughout the enterprise, and specifically here at the Special Warfare Center and School. Maj. Gen. Shachnow cast a long shadow, and we will miss him dearly.”

Maj. Gen. Shachnow is survived by his wife, four daughters and more than a dozen grandchildren. A memorial service will be held at 3 p.m. Oct. 13 at Boles Funeral Home in Southern Pines.

As a 6-year-old boy, the general was among thousands of Jews held prisoner at the Kovno concentration camp near Kaunus, Lithuania. He lived in the camp for more than three years before being liberated.

In 1994, Maj. Gen. Shachnow told The Fayetteville Observer that the experience of the concentration camp left a deep mark on him.

“After I finished that experience, I was very cynical about people,'' he said. “I didn't trust people. I thought that there is a dark side to people. If you leave things to people, they'll probably screw things up.''

After moving to the United States, Maj. Gen. Shachnow began a new life with his family in Massachusetts, but dropped out of school to enlist in the Army, despite hardly being able to speak English.

He later attended Officer Candidate School as a sergeant first class and was commissioned in 1960 as an infantry officer, according to his military biography. He served with the 4th Armored Division until 1962, when he volunteered for Special Forces.

Maj. Gen. Shachnow served with the 5th Special Forces Group and commanded the secretive “Detachment A,” a small team of Special Forces soldiers who operated in Berlin during the Cold War and prepared for possible war with the Soviet Union.

In 1990, Maj. Gen. Shachnow was the commander of all American forces in Berlin when the Berlin Wall was toppled, near the end of the Soviet Union.

He told The Fayetteville Observer that the history of the moment was not lost on him.

“Here it is the very capital of fascism and the Third Reich. The very buildings and streets where they were goose-stepping and heil-Hitlering and the very system that put me in the camp and killed many people,” he said. “Here we are 40 some-odd years later, and I come back to be commander of American forces in that city and a Jew on top of that… It sort of adds insult to injury, doesn't it?''

While serving in infantry, airborne, airmobile and Special Forces units, Maj. Gen. Shachnow also earned degrees from the University of Nebraska and Shippensburg State College in Pennsylvania. And he received an honorary doctorate from the Harvard Executive Management Program.

“Here we are 40 some-odd years later, and I come back to be commander of American forces in that city and a Jew on top of that… It sort of adds insult to injury, doesn't it?”

Maj. Gen. Shachnow was inducted as a Distinguished Member of the Special Forces Regiment in 2007. During his military career, his awards and decorations included two Distinguished Service Medals, two Silver Stars, the Defense Superior Service Medal, the Legion of Merit, three Bronze Stars and two Purple Hearts, among other honors.

He also was honored with the U.S. Special Operations medal for outstanding contributions to the special operations community and is included on the honor roll in the Infantry Officers’ Hall of Fame at Fort Benning, Georgia.

Following his retirement, Maj. Gen. Shachnow authored a best-selling autobiography, “Hope and Honor,” which was published in 2004.

And Bob Charest, a veteran of Detachment A who twice served under Maj. Gen. Shachnow, said the general would be remembered as one of the greatest leaders in Special Forces history.

“He stood out throughout his career,” Charest said. “He is quite an icon among Special Forces troops.”