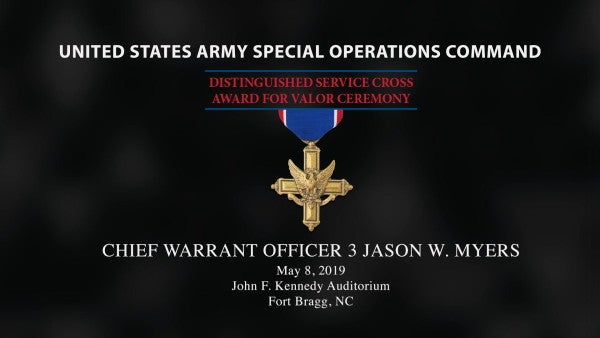 A little more than a year later, in November of 2011, Myers repeatedly went into a building under enemy attack, surrounded by grenade blasts to help rescue 15 hostages in Afghanistan.

About 3:15 p.m. on Nov. 10, 2011, Myers' unit noticed insurgent weapon fire in a civilian compound distribution center, a Special Forces major said at a ceremony Wednesday where Myers was presented with his second Distinguished Service Cross Award in the John F. Kennedy auditorium at Fort Bragg.

In an interview after Wednesday's ceremony, Myers said his team initially wasn't sure if the enemy fire was a baited ambush to draw the troops out.

After realizing the attack was focused on the district center, Myers' team notified partner forces — the Afghan uniformed police, a special tactics team and the Afghan National army Commando Corps, the major said.

His team was directed to move toward the west gate of the center to link up with the rest of the team, where Myers' team immediately was under attack by enemy fire.

Several grenade explosions later and after entering buildings at the compound, Myers' commanders learned about the hostages from a wounded Afghan district chief of police, who said a couple of insurgents were wearing suicide vests, the major said.

After nine hostages were rescued and Myers received medical attention, he returned to the district center compound to provide a ladder to help rescue the remaining government officials, the major said.

After that rescue, he volunteered to further assist with clearing the building, where a booby trap was triggered, the major said.

“He entered the main building three total times in order to clear it of all enemy fires,” said Lt. Gen. Francis Beaudette, commander of the U.S. Army Special Operations Command, “All of this was done while sustaining shrapnel injuries and constantly under active enemy fire.”

Surrounded by friends, family and fellow special operations soldiers, Beaudette presented Myers his second Distinguished Service Cross for his role in helping rescue 15 hostages while deployed to Afghanistan in 2011.

Myers' actions from the 2010 and 2011 attacks have made him the only current active-duty soldier to receive multiple Distinguished Service Cross awards, Beaudette said.

Myers received his first Distinguished Service Cross in 2012 for his role in rescuing two Afghan Police officers while under enemy fire on March 27, 2010.

Beaudette recognized Myers' family for instilling values in him prior to his military training, and said Myers' actions exceed the standard level of performance.

Beaudette said if Myers were to tell what happened, he would talk about his teammates' actions.

In an interview with The Fayetteville Observer after the ceremony, Myers said the attack was during month eight of an 11-month deployment.

“I've always been fortunate,” Myers said when asked about receiving the Distinguished Service Cross Award twice. “I've always been surrounded by the best officers and the best (noncommissioned officers) in the Army. And with multiple deployments to the same area, we knew the locals. We had a lot of rapport and these longstanding relationships with some of these people, so there was a lot of trust and history between us, the locals and the partner forces.”

His actions on Nov. 10 and 11, 2011, assisted with the rescue of 15 hostages, including three district sub-governors and one district chief of police, the Special Forces major said at Wednesday's ceremony.

Beaudette said 49 years ago, 56 Green Berets sat in the same JFK auditorium where Myers was recognized Wednesday and were told about “a risky plan,” to rescue American prisoners of war in Vietnam. Some of the soldiers walked out the back door, and chose not to rise to the level of standard of expectation of extreme danger that the nation required of them, Beaudette said.

He said Myers' actions are similar to those who walked to the front of the auditorium and signed their name next to a dotted line to go on the mission.

“Jason has demonstrated on not just these two (Distinguished Service Cross Award) occasions but each and each every day he rolls out of the team room that he has the same fearless courage and unbending character of these men,” Beaudette said. “He's going to continue to inspire others to protect the nation without fail, without fear and without equal, and we are incredibly proud of him today.”