Soldiers will get their hands on the Army’s new 7.62mm squad marksman rifle as early as next year

Heckler & Koch will soon begin delivering thousands of 7.62mm squad-designated marksman rifles to the Army to give infantry and other close-combat units a better chance of penetrating enemy body armor 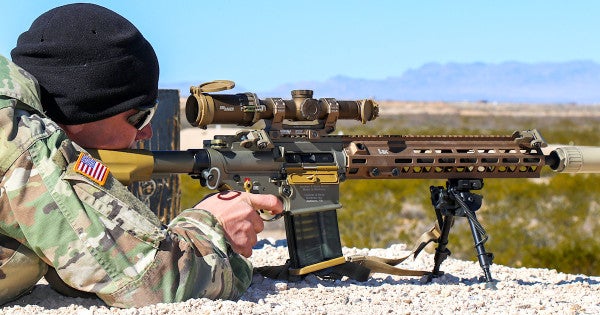 Heckler & Koch Defense Inc. will soon begin delivering thousands of 7.62mm squad-designated marksman rifles to the Army to give infantry and other close-combat units a better chance of penetrating enemy body armor.

H&K will deliver “between 5,000 and 6,000” variants of the G28 rifle, which the Army plans to issue as its new squad designated marksman rifle (SDMR), according to a July 12 H&K news release.

Under the agreement, the rifles will be manufactured by H&K in Oberndorf, Germany, and will begin to arrive in the H&K-USA facility in Columbus, Georgia, early next year, according to the release. Once there, H&K-USA workers will install scopes and mounts purchased by the Army under a separate agreement.

“This is a significant achievement for Heckler & Koch,” H&K-USA's chief operating officer, Michael Holley, said in the release. “The HK SDMR system will add much-needed capabilities to virtually every squad in the Army. We are honored by this opportunity.”

The new SDMRs are part of an interim effort to make squads more lethal ahead of the Army's fielding of the Next-Generation Squad Weapon system sometime in 2022, service officials have said.

As a short-term fix, the Army selected the G28 as its M110A1 Compact Semi-Automatic Sniper System in 2016, to be used with the service's new 7.62mm enhanced performance round to give squads more penetrating power.

In the past, the Army relied on the Enhanced Battle Rifle, or EBR, 14 — a modernized M14 equipped with an adjustable aluminum stock with pistol grip, scope and bipod legs — to fill the growing need by infantry squads operating in Afghanistan to engage enemy fighters at longer ranges.

But the EBR is heavy, weighing just under 15 pounds unloaded. The M110A1 weighs about 11 pounds.

In the long term, the Army is working with gunmakers to develop the new Next Generation Squad Weapon (NGSW) that is slated to fire a special, government-produced 6.8mm projectile that promises higher velocities at greater ranges, service officials say.

Army officials said recently that they expect to begin receiving prototypes of the NGSW in July and August and that the weapon could be fielded to units beginning in late fiscal 2020.