The Army is stockpiling ammo ahead of its next big fight 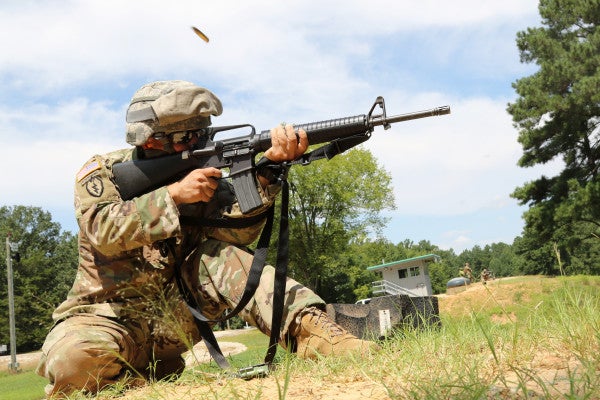 The head of Army Materiel Command said recently that he is putting a high priority on munitions readiness to make sure Army units are prepared for the next war.

“This means having the right munitions – small-caliber to precision munitions – where we need them at the right time and the right place,” Gen. Gus Perna told an audience at a March 14 Association of the United States Army event. “That means we must first ensure that the capability we have here in can receive, store and issue munitions in a timely, effective manner.”

Perna's comments come at a time when the Army continues to replenish its ammunition stocks as it prepares to face an equally formidable foe such as Russia or China on the battlefield.

In the service's fiscal 2020 budget request, it is increasing its investment in every type of ammunition except artillery shells, a heavy investment area in the Army's fiscal 2019 budget.

The Army plans to buy 5,112 Hellfire missiles this year compared to last year's buy of 2,309. The service also plans to spend $508 million on small- and medium-caliber ammunition versus the $382 million it spent last year.

Perna has ordered a reorganization of how depots distribute ammunition to the Army's combat units, most of which are based in the United States.

“We know where they are going to distribute ammunition when the time comes, and we know what they have to replace in time of war,” he said. “This is the first time this has been done, and I am very proud of where we are at. … With that said, we have a lot of work to do.”

Perna credited the National Guard and reserves as key supporters of the effort.

“They are lined up to support us,” he said. “They are executing moves around the country as we relocate ammunition … where it needs to be.”

Perna is also repositioning ammunition stocks to key locations around the world at the direction of Army Secretary Mark Esper and Army Chief of Staff Gen. Mark Milley.

“It is a matter of physics – the requirement versus the time to get it there,” he said. “The secretary and the chief have given me permission; I have moved it around the world. We have put it in place in support of the , and we know the requirement and we know how to backfill them as they use it. More importantly, we know how it is going to be used in case of war.”

SEE ALSO: The Pentagon Wants A Buttload Of Guided Rockets To Slap Russia And China From Hundreds Of Miles Away

WATCH NEXT: The Army Tests LSD On US Service Members