A tank's mysterious transformation from olive drab to lemon-lime green was solved Wednesday when the sponsor of a Bluefield State College club came forward and said some paint that was ordered turned out to be the wrong color. 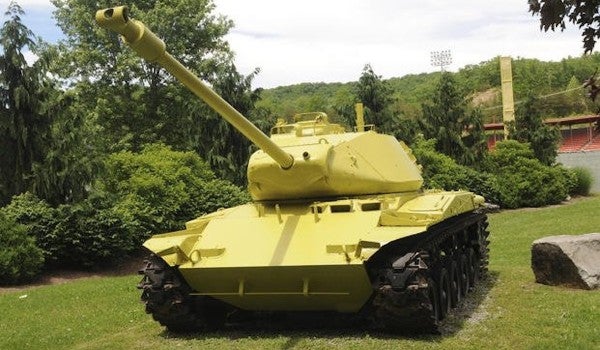 BLUEFIELD, WVa.— A tank's mysterious transformation from olive drab to lemon-lime green was solved Wednesday when the sponsor of a Bluefield State College club came forward and said some paint that was ordered turned out to be the wrong color.

Local residents and officials were puzzled Tuesday when Bluefield Daily Telegraph photographer Eric DiNovo shot a picture of the tank parked near Bowen Field. DiNovo had noticed that the tank had been painted a bright lemon-lime color.

Bluefield city officials were initially unaware of the color change. City Manager Dane Rideout, a retired Army colonel, hesitated to call the change vandalism since numerous organizations and groups maintain many of the local landmarks.

The mystery was solved Wednesday when Jerry Conner, sponsor of the U.S.S. Yeager Chapter of Starfleet International, a science fiction club at Bluefield State, sent a letter to the Daily Telegraph describing how the color change had happened.

Conner said that the U.S.S. Yeager club had been cleaning and painting the M-41 Bulldog tank near the entrance to Lotito Park for about 20 years. The tank needed a new coat of paint, and the club had made plans to get “the proper shade of olive drab for a World War II-period tank.”

“We took a sample of the color to a Bluefield merchant and purchased two gallons which was supposed to match our sample,” Conner said in the letter. “We were worried when we opened the containers and found something nowhere near our sample. 'Surely it will dry the right color,' we thought, and proceeded with the prep and painting. Imagine our chagrin when it dried, not green-brown olive, but instead, bright mustard yellow!”

Conner said in the letter that the club was going to meet with the vendor and try to obtain a replacement batch of paint, and make arrangements with the city to get the tank back to “its proper battle color.”

“At least the yellow of the tank is a nice match for the red of our faces,” Conner said.

Rideout said the city obtained a copy of the paint receipt from the local retailer that sold it to the club. On the receipt, the color is called “tank green.”

“We will call and talk to them (the club),” Rideout said.

The city does not own the tank. Owned by the National Guard, it is a Korean War piece of equipment, Rideout said. The Walker Bulldog tank was used from 1945 to 1961.