A district superintendent for a high school that prevented a student from participating in graduation ceremonies apologized to him and his family... 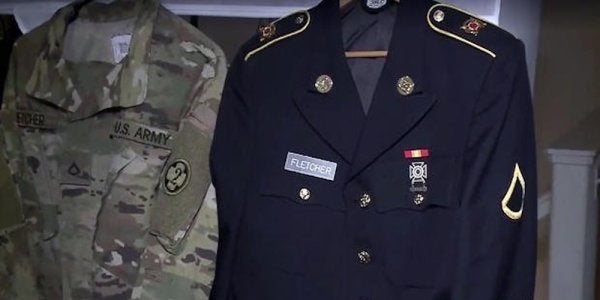 A district superintendent for a high school that prevented a student from participating in graduation ceremonies apologized to him and his family on Saturday.

Harland Fletcher, a private first class reservist in the U.S. Army, skipped the Friday ceremonies at Liberty High School rather than cover his Army uniform with a cap and gown. The school initially informed him that he could not participate if he chose not to wear a cap and gown.

It now appears the school made a mistake, and Liberty Union High School District Superintendent Eric Volta acknowledged it, saying a review of state law showed Fletcher was within his rights.

“It has become clear that Harland Fletcher may have the right to wear his U.S. Army Dress Uniform at his graduation, and on behalf of the Liberty Union High School District, I publicly apologize to him and his family for the incident,” Volta said in a statement released late Saturday and posted on the school’s website.

Harland Fletcher by law has right to wear army uniform at high school graduation. But on fri was denied @kron4news pic.twitter.com/nz42tlpg96

In an interview with ABC7, the student said he was “basically told this is a graduation ceremony. You aren’t allowed to wear that uniform. You’re supposed to wear a cap and gown.”

According to Volta, state law allows a student who has completed basic training to wear the uniform upon graduation

“No slight was meant to Harland or the U.S. Army,” Volta said.

How the decision came down seems to be in dispute. Harland told ABC7 that he had mentioned his plans to a school counselor several times in the weeks leading up to the graduation and was told it wouldn’t be an issue. But Volta seemed to indicate that Liberty Principal Patrick Walsh did not receive adequate notice.

“With a little prior notification, I’m sure that Principal Walsh and the site administration would have come to this conclusion before the ceremony,” Volta said. “Principal Walsh and the District do support the armed forces, as exemplified by his recognition of graduating seniors that have chosen the military for their post-graduate plans during the graduation ceremony.”

Attempts to reach the Fletcher family early Sunday were unsuccessful. According to media reports, Fletcher will pick up his diploma free from fanfare on Monday at the school.

“Again,” Volta said, “I apologize to Harland for this unfortunate incident and thank him for his service to our country.”