Sikorsky says its modified fly-by-wire UH-60 Black Hawk is progressing through its flight test program by incorporating more autonomy software and sensors onto the aircraft, with a fully autonomous flight projected sometime in 2020 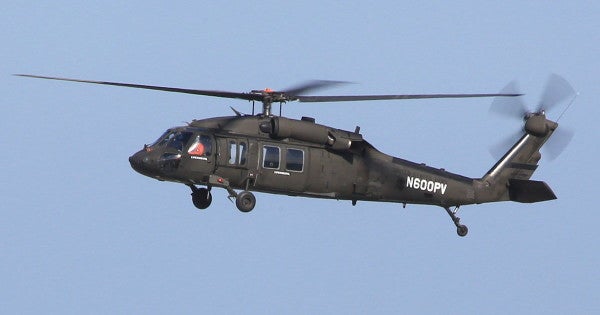 Sikorsky has two goals in mind for its optionally manned S-70 helicopter: to make the autonomous technology easy to retrofit on existing aircraft for users like the U.S. Army, and to give pilots various modes of autonomy so they can commit more time toward their mission, according to company officials.

The company, now a subsidiary of Lockheed Martin Corp., this week said it's progressing through its flight test program by incorporating more autonomy software and sensors onto the aircraft, with a fully autonomous flight projected sometime in 2020, said Igor Cherepinsky, Sikorsky Director of Autonomy

“We will show the world that this is capable… being operated from the ground sometime next year,” Cherepinsky said in a phone call with reporters Monday.

The key now is to move seamlessly through varying piloted modes, “from the pilot 100% in the loop to autonomy 100% and … to everything in between,” Ward said.

It's what teams have been working on in recent months since first incorporating the OPV technology kit on the UH-60A Black Hawk variant on May 29 during a flight test in West Palm Beach, Florida.

Engineers have moved through numerous modes of augmentation during test, with autonomy layered within the fly-by-wire system, or the semi-automatic, electronic avionics system that uses computers to process flight control, Ward said.

Since the first test, “we moved on to rate command attitude hold mode,” Ward said, examining aircraft performance when it works to maintain or adjust attitude, or how the aircraft moves in respect to the horizon.

Pilots will continue to expand the parameters, including different airspeed, attitude and altitude combinations, he said.

Once in production, the goal is for pilots to focus on the mission, but also have options, Cherepinsky explained.

This is “to augment the pilots, not replace the pilots,” Cherepinsky said. Still, it will allow for U.S. services or foreign customers to commit fewer aviation personnel per aircraft by virtue of the system, he said.

While the aircraft — a modified S-76B that uses the company's MATRIX software and hardware combinations that enable autonomous flight — has been routinely tested since 2013, Army personnel took the aircraft through a series of mission tests last year, according to Defense News.

“MATRIX is designed to improve flight operations and augment the pilot in the difficult flight conditions where helicopters are called on to operate: among wires, trees and buildings and in dangerous weather conditions,” Cherepinsky separately told Military.com Wednesday.

“We are developing this system to the highest standards for not only military qualification, but also working closely with the FAA on certification, enabling MATRIX technology to be used on military, commercial and civil fixed-wing and rotary-wing aircraft that carry both cargo and passengers,” he said, saying there are plans in place to add MATRIX into the company's S-92 helicopters.

Evaluators are incorporating lessons from SARA and MATRIX onto S-70, as well as the Defense Advanced Research Projects Agency's Aircrew Labor In-Cockpit Automation System (ALIAS) program, which Sikorsky has been partnering on since 2015.

“Early in the development of our MATRIX suite, we saw close parallels with … ALIAS,” Cherepinsky said. “With MATRIX as its baseline, the ALIAS program's goal is to introduce high levels of automation to enable operation with reduced onboard aircrew while improving mission performance and safety.”

“With every test, we are closer to qualifying and certifying autonomous flight” technologies, he added.

Ward said in the months ahead, pilots will learn to do more with less control.

“A pilot is 100% in the loop, but its very much more stable platform to do things like and then you upshift again into MATRIX or full autonomy, and now you become a mission manager where you're watching your plan that you input into the aircraft unfold in front of you,” he said. “And now, you're doing other things, like managing the .”

“We need to underscore the point that not only are we looking towards future vertical lift … but we also care deeply about our current fleet, and we want to make sure this technology is retrofittable to our entire product line, both civil and military,” Cherepinsky said.