A 95-year-old Missouri man was awarded France’s top honor Tuesday recognizing his participation in the Battle of the Bulge and the liberation of France during World War II. 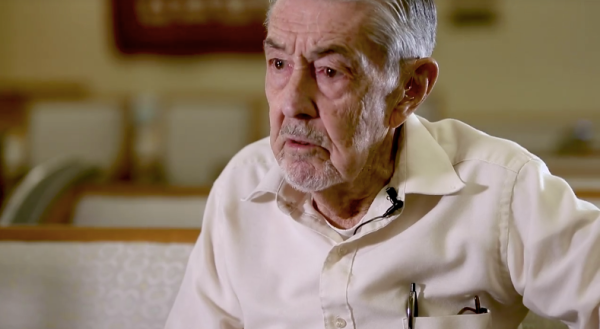 SUNSET HILLS — A 95-year-old Sunset Hills man was awarded France’s top honor Tuesday recognizing his participation in the Battle of the Bulge and the liberation of France during World War II.

Darwyn “Tony” Snyder was presented the French Legion of Honor in a ceremony at the Friendship Village retirement home’s chapel and was recognized by such notables as Sunset Hills Mayor Pat Fribis and a representative of U.S. Sen. Josh Hawley.

Snyder, a native of Iowa, entered active duty with the U.S. Army in 1943 and departed for Europe the next year, when he was 20. He participated in three major military campaigns — Ardennes-Alsace, the Rhineland and Central Europe — and served as a sergeant with the 47th Tank Battalion, 14th Armored Division. Memories of certain battles stand out in his head, like the bitter cold during the Battle of the Bulge.

“The little town of Hatton was just leveled,” Snyder told the Post-Dispatch. “People’s homes — they just got out if they could go somewhere further … war is just crazy, things happen that are terrible.”

Snyder was honorably discharged in 1946 and he earned a bachelor’s degree in music at Morningside College in Iowa. That’s also where he met his wife, Joan, a piano player and actress. The pair are the longest-married couple living at Friendship Village — 72 years together. Snyder went on to be a band director in Omaha, and founded the Nebraska Wind Symphony in 1977. He continued to substitute teach in Omaha until he was 87, and in 2013 he moved to St. Louis to be close to his son.

Snyder is known to family and friends as a man who loves to throw a good party and play the piano, but not many knew the details of his military service, family members said.

“We’re very, very proud,” said Snyder’s daughter, Melanie Coon, adding that she learned much during the ceremony for her father. “He never discussed the war.”

Snyder just spent two days at a hospital wrestling a bout of pneumonia, but was discharged so that he could attend Tuesday’s ceremony. Hooked up to an oxygen machine, Snyder cracked a joke or two for the packed chapel that included grandchildren and great-grandchildren.

“I really wasn’t planning to say anything but Joan said, ‘You know, I don’t think there will be very many people in the chapel,’ ” Snyder said. “And so I thought, what can I do that would maybe get people interested? And I thought, I’ll go to the hospital for two days.”

“Do what you feel would be good,” Snyder said. “If you’re lucky enough to get a college education, then get in with what you think you’d enjoy.”