A retired Army combat medic who stood for hours saluting the Dallas officers slain in last year's police ambush was... 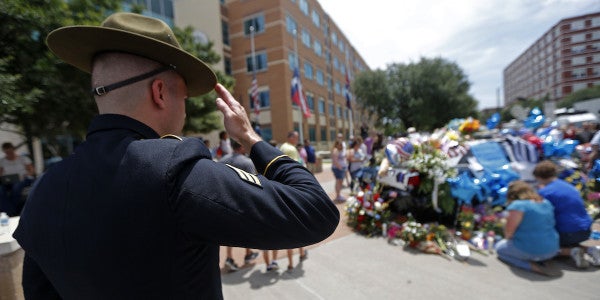 A retired Army combat medic who stood for hours saluting the Dallas officers slain in last year's police ambush was fatally shot Sunday evening in his home in The Colony, Texas, police say.

Chandler Davis, 34, was found by police lying on the ground at home with a gunshot wound to the chest. A female had called police to the home in the 5200 block of Ragan Drive saying someone had been shot. Davis was taken to Medical City Plano Hospital, where he was pronounced dead.

Police named Davis' brother, 38-year-old John Guthrie Davis III, as the suspect. He has been charged with murder.

The elder Davis told police that the two had gotten in a fight because his brother accused him of stealing a gun. According to him, his brother was “tearing things up” looking for the missing gun.

The older brother recorded the confrontation on his phone, he told police, and that infuriated his younger brother, according to the affidavit.

John Davis said he was afraid of his brother's actions, so he grabbed his handgun and hid it under a blanket in the living room in case he needed it.

Chandler Davis then grabbed his brother's phone out of his hand and threatened to break it, according to the affidavit. At that point, John Davis told police he was scared for his life, grabbed his gun and shot his brother.

According to the University of North Texas, Chandler Davis was on the pre-business track at the school, but hadn't taken classes since the summer of last year.

Before that, he served in the Army. He made headlines last July after standing in uniform for hours, saluting the police officers killed in last year's ambush downtown.