Human remains found Dec. 1 in a shallow grave in empty desert in Riverside County, California, are believed to be … Continued 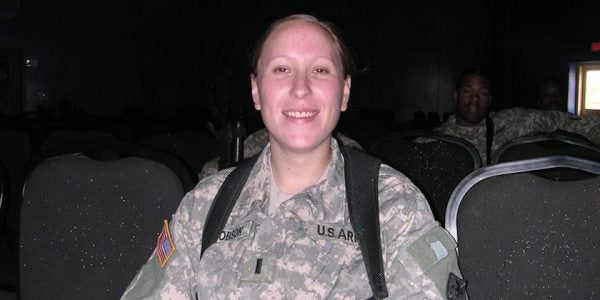 Human remains found Dec. 1 in a shallow grave in empty desert in Riverside County, California, are believed to be those of a San Diego woman whose ex-husband is accused of killing her, authorities said.

Along with the corpse of a woman, authorities also located the remains of a dog in the grave, said Cpl. Fred Alvarez of the Ontario Police Department, which has been investigating Jacobsen’s disappearance.

He said the Riverside County Coroner’s Office will determine the woman’s identity.

The grim discovery came two days after 140 or so law enforcement personnel began searching for Jacobsen’s body in the expanse of the desert in Cactus City, about 10 miles east of Indio.

Alvarez said information provided by Jacobsen’s ex-husband, Dale Ware, who has been charged with murder in her presumed death, led police to the remote area.

In an email to the Union-Tribune, Ware’s lawyer, Steve Cline, said his client on Dec. 1 voluntarily showed police “the place he had buried (Jacobsen)” — without a plea bargain or promise of leniency.

The grave was discovered, with help from a cadaver dog, south of Interstate 10 near Box Canyon Road about 10:30 a.m., Alvarez said.

“For everybody here, including volunteers, our biggest thing is that that’s somebody’s daughter, somebody’s sister,” Alvarez said by telephone Friday evening. “It’s very important for us to get them closure.”

Jacobsen, whose friends said she served two tours in Iraq, was last seen in Ontario on Sept. 2.

According to a felony complaint against Ware, authorities believe Jacobson was killed on Sept. 3 in San Bernardino County.

Her SUV was found abandoned with the keys inside on Sept. 7 in North Park, not far from her home, according to Facebook posts about her disappearance. Ontario police said evidence found in the white Chevrolet Equinox led detectives to suspect she had been slain.

Ware was arrested at his home in Phoenix, Arizona, on Oct. 12 and later charged with murder.

According to court records, Ware and Jacobsen married on Feb. 28, 2014 and separated on March 1, 2016. She filed for divorce, and the marriage dissolution was granted on Dec. 13.

The divorce filings against Ware said Jacobson would keep the couple’s home in Chula Vista and a property in Dallas. She was to pay Ware $20,000 in cash to even out the value of what each of them were keeping. Ware was excused from paying her back on two loans: $30,000 in 2010 and $6,000 in 2011.

Authorities have not disclosed a motive for the presumed killing.