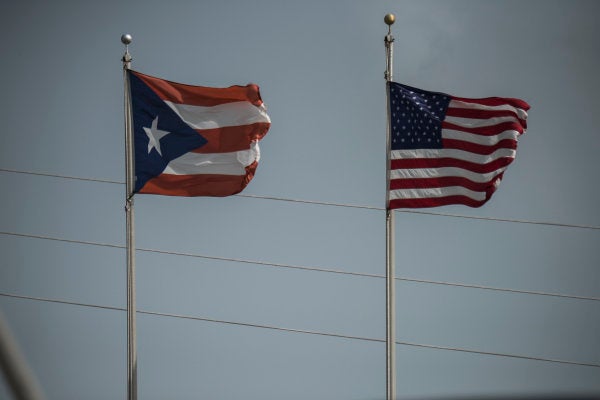 Frances and Efrain Santiago, natives of Puerto Rico, wanted to show their support last month for protesters back home seeking to oust the island's governor.

The couple flew the flag of Puerto Rico on the garage of their Kissimmee home. It ticked off the homeowners association.

Someone from the Rolling Hills Estates Homeowners Association left a letter at their home, citing a “flag violation” and warning: “Please rectify the listed violation or you may incur a fine.”

Frances Santiago, 38, an Army veteran, demanded to know why.

“I fought for this, to be able to do this,” Santiago, whose service in the Army from 2002 to 2013 included two tours of duty in Iraq as an Army medic, said Thursday.

According to the homeowners association rules, “No sign or flag of any kind shall be erected or placed within the property without the consent of the board.”

But other flags fly throughout the neighborhood, including banners of sport teams and the American “thin blue line” flag, honoring law enforcement, Santiago said.

“I flew the U.S. flag for almost a year and nobody went and complained or left a note at my door,” she said.

“I think it's likely motivated by ignorance not prejudice or discrimination — at least that's what I want to believe,” said Santiago, who has refused to take the flag down.

But in correspondence sent to Frances Santiago, association president Norma McNerney said the bylaws were amended years ago to make an exception for the U.S. flag.

“We have also allowed sports flags to fly during a season for short periods of time,” she wrote. “This board treats all owners the same and in fact we have advised other owners of this restriction. I noticed you have the American flag hanging from your screen in your back yard. Please feel free to hang this flag on your poll. We do not approve state flags or other country flags.”

Santiago and her husband bought their home in the Kissimmee neighborhood in August 2017.

She said she moved her U.S. flag last month and put the flag of Puerto Rico in its place as thousands of Puerto Ricans marched daily through the streets of Old San Juan, demanding the resignation of Gov. Ricardo Rosselló and his Cabinet, who were embroiled in a string of scandals and investigations.

Calls to evict Rosselló from the governor's mansion were fueled by a lingering financial crisis in the U.S. territory, a federal corruption probe and a leaked transcript of a chat among the governor, his cabinet and aides.

Santiago and her husband joined the protests from afar like other island natives living in U.S. communities with growing Puerto Rican populations, including Orlando.

They also fly an American flag and a military flag, neither of which have caused a fuss with the homeowners group.

Alex Barrio, an Orlando-based advocacy group for Puerto Ricans and Hispanics have helped connect Santiago to lawyers who specialize in challenging such organizations.

The group has launched an online petition to persuade the association to reverse itself and “cease their discriminatory practices.”

“She has a right to know why U.S. flags, sports team flags, military flags and flags honoring police are OK but they say no to the flag of Puerto Rico,” he said.

About 1,600 people have signed the petition.

The rule was first flagged by a woman who informed Frances Santiago it was a necessary edict because “past owners spoiled it by putting up too many flags.”

Santiago responded in disbelief, saying she wanted to see the rule in writing and wanted to know why it is unevenly enforced.

“Wow,” the woman replied. “I was just giving you friendly advice. No need to chop my head off.”

Santiago said she hopes to resolve the issue with the association without the expense of a lawyer but said she'll hire one if she needs to.