The Army veteran laid to rest in Florida among thousands of strangers did have immediate family. They hadn’t spoken in years.

Has a story — at least on the surface — ever been more uplifting? In September a funeral home in Naples placed a small obit in the paper. It said Edward Pearson Sr., an 80-year-old Army veteran, had died without family to claim him. Th service would be held Oct. 1 at Sarasota National Cemetery and the public was welcome to attend. The funeral director figured maybe 100 people would show up. 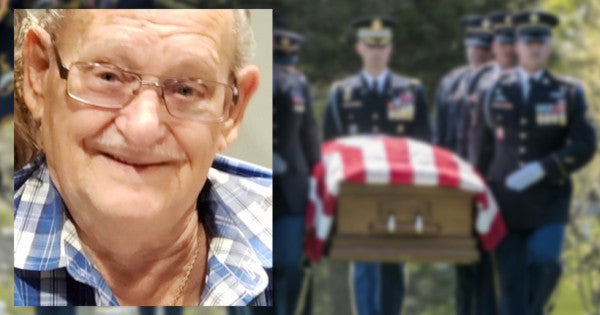 While cars were gridlocked on the interstate, trying to reach the funeral of someone they never knew, a man was driving a milk truck 500 miles away. He kept looking at his clock, hoping 12:30 p.m. would never arrive, and when it did he became upset. It was his father the people had come to honor, all oblivious to his wounding past.

“I hated his guts for what he did to us,” Edward Pearson Jr. said, “but I had to forgive him.”

Has a story — at least on the surface — ever been more uplifting? In September a funeral home in Naples placed a small obit in the paper. It said Edward Pearson Sr., an 80-year-old Army veteran, had died without family to claim him. Th service would be held Oct. 1 at Sarasota National Cemetery and the public was welcome to attend. The funeral director figured maybe 100 people would show up.

But that was before a CNN anchor tweeted it, and a senator posted it, and the invitation went viral, and the next thing anyone knew there were so many people trying to reach the 12:30 p.m. service that even Pearson Sr. himself was late as the car carrying his ashes from Naples was stuck in traffic and needed a police escort. The crowd was estimated at 4,000, with people still coming in after the service. No veteran should ever be buried alone. And Pearson certainly was not. If he didn't have family, then everyone there would be his family …

Only he did have family. He had two sons: Edward Pearson Jr. a 55-year-old milk deliveryman in Pensacola, and his younger brother, James. Their father walked out on them when they were teens. Years later, they were told he was dead.

“I was kind of surprised he was still alive all this time and I never knew about it,” Edward Pearson Jr. said. “I'm hurt because all these years I could have talked to him and found out why he did what he did to us and why we were lied to.” The family did not know of Edward Pearson Sr.'s real passing until the day before the Oct. 1 service. The brothers said that after learning on social media about their father, they placed a call to Legacy Options Funeral and Cremation Services in Naples to inform them they were family.

Michael Hoyt, the funeral director, said the family told the funeral home they did not want it made public they existed, but when pressed he said he was not told that personally.

When asked if he thought the funeral home had deceived the public by not having it announced that family existed after it became known to them, Hoyt said he didn't think so. When asked again, he said he would have to call back.

He called back 20 minutes later with this statement: “Mr. Pearson died alone. Nobody was able to locate any family members and nobody came forward.

“We were contacted late Monday by a family member and they approved the interment at the cemetery and we were informed by the family that no one was going to be attending the service.

Liz Pearson, Edward Pearson Jr.'s wife, told the Herald-Tribune the family found out too late to make arrangements to travel to Sarasota. Any earlier, and they would have.

Wrestling with the past on social media, “some people are not very kind in thinking his family would not show up for him,” she said. “They were never given the option.”

Records show that Edward K. Pearson Sr. married Mary M. Doris in Collingdale, Pa., on May 11, 1963. They had two sons. The junior Pearson was born Jan. 29, 1964. He provided the Herald-Tribune with his birth certificate.

The family moved to Florida when he was 13. His father was unfaithful to his mother, he said, and walked out on the family when he was 16.

The younger Pearson joined the Army after high school, serving for six years in places like Germany and Korea. The last time he spoke to his father, he said, was in 1983, after he returned from basic training.

The younger man said his father never paid child support, so he sent his mother $300 of his military pay to help with the bills.

The elder Pearson and his wife divorced around 1980, his son said. At some point, he moved to Naples and married again. Collier County court records show he divorced his second wife, Gail, in 1992.

Pearson Jr. said Gail, his father's second wife, told Mary, his first wife, that Pearson Sr. had died years ago after being electrocuted at work. He does not know why he was told that. Perhaps she was angry at her ex-husband. Or perhaps that's the message the elder Pearson wanted relayed. No one's sure.

At some point during Pearson Sr.'s life, he expressed a desire to be cremated. But it appears he did not make mention of having sons in a will, or to anyone verbally.

The elder Pearson was stationed at Fort Benning, Georgia, and served in the Army from 1962-64. He was honorably discharged and received a full military funeral at Sarasota National Cemetery. However, Pearson Jr. said that his father had been demoted at one point from sergeant to private for striking a captain.

“His first sergeant protected him from getting kicked out,” he said.

Said Liz Pearson: “He was deserving of a veteran's memorial and I don't want to discount that. But this was also an individual, who, for whatever reason, convinced people he had no one.

“At the same time it is heartwarming to see people honor a veteran they thought had no one. The world needs more of this.

“I can't fault them for not knowing his secrets.”

The folded flag that was presented at the service will now be given to Mary Pearson, his ex-wife, who will in turn present it to her son.