The court levied the minimum mandatory sentence to Mark Edward Allen — 5 years in prison — for a felony charge of "attempted destruction of United States property by means of an explosive." 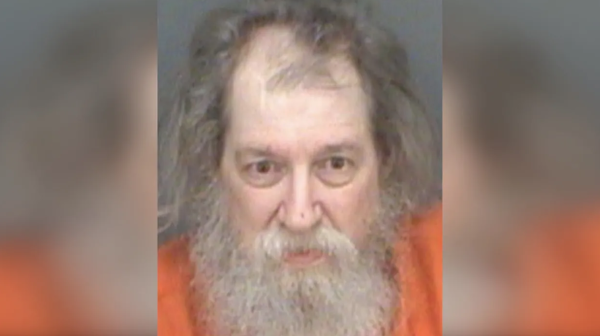 TAMPA, Fla. — Apart from his furrowed brow and brooding eyes, Mark Edward Allen was nearly unrecognizable as he shuffled through a federal courtroom Friday morning.

Gone was the bearded, long-haired man from Allen's mugshot, taken inside the Pinellas County Jail after the U.S. Army veteran was arrested for attaching a homemade explosive to the padlock of an entrance gate at the Bay Pines VA Healthcare Systems campus.

Instead, Allen arrived at his federal sentencing hearing clean shaven, with close-cropped hair. Allen has spent the past 6 months completing at least 25 educational and vocational programs offered inside the Citrus County Detention Facility, where he's been held without bail, defense attorney Alec Hall said.

And, Hall said, Allen has begun to address the drug and alcohol addictions that compounded the mental health issues that led him to leave the bombs as a means for “simply seeking attention.”

The court levied the minimum mandatory sentence to Allen — 5 years in prison — for a felony charge of “attempted destruction of United States property by means of an explosive.”

In sentencing Allen, U.S. District Judge William Jung told him he would recommend he be placed in “lenient, minimum security” inside the Coleman Federal Correctional Complex in Sumter County. He also opted to shorten Allen's five years of supervised probation to three years, on the condition that Allen would undergo substance abuse and mental health treatment.

“I'm also ordering no possible involvement in any activity or going anywhere near pyrotechnics,” the judge said. “No firecrackers, no bottle rockets, no sparklers or anything like that.”

Jung added that his leniency shouldn't be viewed as a “suggestion that punishment for these actions is unjust in any way.”

Allen, who turns 61 on Christmas day, pleaded guilty to creating the improvised explosive device discovered at the VA hospital on May 29, his sentencing memorandum states. A longtime patient at Bay Pines, Allen filled the device with BB pellets and black powder rigged to explode, once the entrance gate to the compound was opened.

In addition to the IED found on the hospital gate, FBI technicians also tied Allen to a fake explosive device found earlier that month. Unlike the other device, a live explosive filled with electrical wires, black powder and BB pellets, Allen's “dud” explosive came with a note that read “no problem just want 2 B heard!!!”

Just days after investigators discovered Allen's real explosive, his wife found another explosive in their St. Petersburg apartment. She drove it to a friend's house while Allen was sleeping. It was her phone call to St. Pete police that allowed investigators to link Allen to the attempted bombings. A search of their home revealed at least seven other explosives in various stages of completion, inside “a den of clutter and bomb making,” Judge Jung said.

At his hearing, Allen declined to address the court, but in the minutes before and after the hearing, he ran down a list of concerns and questions with his attorney:

“When he talks do I stand up?”

“Why does it say I acted maliciously? There was no malice. I wasn't mad at all.”

“My wife's supposed to be here.”

When it came time to leave, Allen turned to glance near the courtroom's open door.

She never showed up.