Ryan McMullen served in Afghanistan, but didn’t get shot until he protested in America

'This is worse than anything I received in an actual war zone.' 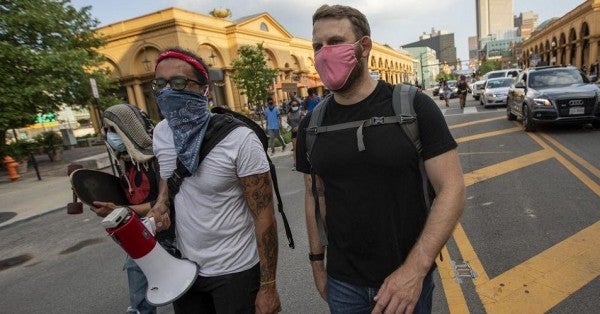 Ryan McMullen served with U.S. special forces in Afghanistan, where he was awarded the Bronze Star. But the first time he got shot didn't come until he returned to the streets of his hometown, where he was hit with six wooden bullets during protests in Columbus.

From the start of the protests until Friday, McMullen was pepper-sprayed, struck with tear gas canisters that ricocheted off the ground, run into with a bike ridden by a police officer and hit with the big wooden pellets on two separate days, causing serious wounds on his leg.

When he woke up Monday morning, McMullen assessed his injuries from the protests: a throbbing blue, purple and red left leg 30% to 40% larger than his right, and a pair of burst blood capillaries running down his other leg. He was not arrested but did get into multiple confrontations with police.

“This is worse than anything I received in an actual war zone,” said the veteran, who also worked with a private contractor in Afghanistan and East Africa.

But this white graduate of Westerville North High School, who earned a degree in civil and environmental engineering from Ohio State in 2017, says the story is not about him or other whites taking part in the protests.

For McMullen, one of the most important things white people can do is step back and let the voices of black people and other minorities be heard.

“It's not our movement, but a movement that me and other white people are supporting,” he said.

He said he attempts to make a difference by “weaponizing” his white privilege and identity as a veteran to protect fellow protesters when police confront them. Ultimately, though, McMullen said that the most important work is being done by those in the black community.

His close friend Jordan Mitchell is a black, 30-year-old resident of Columbus and a fellow protester who met McMullen while they were working at a bar. Mitchell said he got involved with Black Lives Matter because he thought the 2015 killing of Michael Brown in Ferguson, Missouri, was wrong.

Mitchell said community organizers and people like Ben Willis, another protester he and McMullen know, are doing well in leadership positions that they may not have held before the protests began.

“This work is very difficult; it is emotionally draining and pretty thankless,” Mitchell said.

Willis, 28, doesn't view himself as an organizer but someone who just shows up and encourages other people to do the same.

“Navigating the world as a person of color is a protest every day,” he said.

Willis and Mitchell, like McMullen, have been witnesses to and victims of the tactics used by law enforcement officers to disperse crowds.

“After being splashed with mace, I had somebody carry me off and pour water on my face to clear my eyes so I could see, or else I would've just laid on the ground and been continually maced by police officers,” Mitchell said.

He said the tactics used by the police will always surprise him but really shouldn't.

“To show up to these protests and just be met with such hostility and militancy and the way they handled the crowds totally exacerbated the situation,” Mitchell said. “I don't have faith in any of these people who put on these uniforms.”

McMullen is no stranger to protests. His involvement with the Black Lives Matter movement goes back to 2015, when he joined demonstrations in response to Brown's death. His earliest protest experience came in Washington, D.C., during the second wave of the Occupy Wall Street movement.

He has been protesting every night in Columbus since the demonstrations began after George Floyd's death under the knee of former Minneapolis police officer Derek Chauvin.

McMullen describes his involvement as “being a body.” If the protests get out of control, he tries to make sure police officers don't harm others.

In a video posted on Twitter, McMullen can be seen shielding a protester with his bike last weekend as police fired on her with nonlethal rounds.

Mitchell said white people involved with the protests should try to be like McMullen by using their voices and actions to amplify those of blacks.

“In Ryan we have a white ally who is willing to put his body between the police and bodies that are in danger,” Mitchell said.

McMullen compared the tactical approach of police officers he's experienced in the past week to his time in Afghanistan.

“It feels strange to have another American look at me and decide that it's OK to bodily harm me,” he said. “I don't want to have those feelings on the streets of my own city.”

McMullen said he spent most of his overseas tour as a driver, always staying mobile, and only experienced direct combat a few times.

He mostly spent time clearing villages in close proximity to peaceful civilians. He never had any personal physical injuries, but was close to a truck when it blew up because of an improvised explosive device.

“There was no assumption of aggression unless somebody attacked us,” McMullen said. “The rules of engagement were a lot more strict because you have to keep a cool head when you are in a war zone, but also interacting with a peaceful populous.”

McMullen said that in his view, local police haven't been trained properly to respond to situations like this so their violent actions, such as spraying their nonlethal weapons into crowds of people, unsurprisingly cause chaos.

“These are crowds of hundreds or thousands of people, and (police) don't seem to care where the threat comes from,” McMullen said. “Once they perceive the threat, they try to scatter people and just create more chaos. As a soldier, the goal was for us to reduce the amount of chaos.”

McMullen's memories of the past week aren't just marred with the chaos and violence, but also of moments that included peacefully marching up High Street or simply sitting on the Statehouse lawn in the sun.

“It seems like peaceful moments like this should stick in your mind, but it's so tarnished by the numerous nights in a row where people are put through this ringer of hours of peaceful protests then being shot with tear gas and then going home to try and sleep with your eyes swollen shut,” McMullen said.

He said he hopes change will result from these protests, but he wonders whether it's more likely to happen for his generation's children and grandchildren.