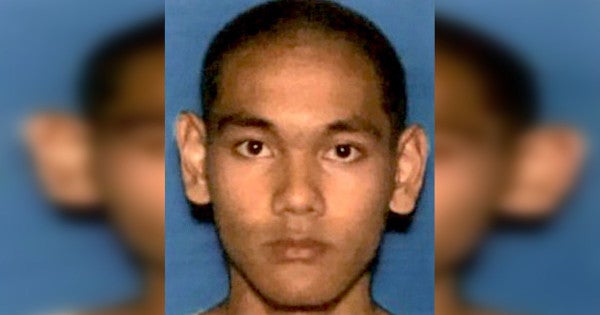 Mark Stevens Domingo, 26 of Reseda, in the San Fernando Valley, was arrested Friday night after he took delivery of what he thought was a live bomb from an undercover law enforcement officer posing as bomb maker. He was charged with attempting to provide materiel support to terrorists.

According a federal affidavit, “after considering various attacks — including targeting Jews, churches and police officers — Domingo decided to detonate an IED at a rally scheduled to take place in Long Beach this past weekend. As part of the plot, Domingo asked his confederate — who actually was cooperating with the FBI as part of the investigation — to find a bomb maker, and Domingo last week purchased several hundred nails to be used as shrapnel inside the IED.”

“Domingo said he specifically bought 3-inch nails because they would be long enough to penetrate the human body and puncture internal organs,” the affidavit states.

Prosecutors alleged Domingo sought retribution for the New Zealand mosque attack and said he was willing to become a martyr. “There must be retribution,” he posted online, according to the federal criminal complaint. He also allegedly expressed allegiance for the Islamic State group.

“America needs another vegas event …(to) give them a taste of the terror they gladly spread all over the world,” he allegedly wrote, referring to the massacre at the Route 91 concert.

The FBI saw the posts and used an informant to begin a series of meetings with him. During these discussions, he alleged talked about targeting “Jews, police officers, churches and a military facility.” A law enforcement source told the Los Angeles Times he also considered attacking the Santa Monica Pier.

He talked about drive by shootings using a modified AK-47 style rifle, authorities allege. But he ended up targeting a rally in Long Beach.

The development comes less than 48 hours after a gunman opened fire inside a San Diego County synagogue, killing one woman and wounding several others in what law enforcement officials are investigating as an anti-Semitic hate crime.

Southern California has been the scene of several terror incidents, including one by a prison-based terrorist group that targeted the U.S. government and supporters of Israel.

In 2005, Kevin James founded Jam'iyyat Ul-Islam Is-Saheeh, or JIS, inside a California prison and led a conspiracy to attack Los Angeles International Airport, several Army recruiting centers and the Israeli Consulate in L.A. The group planned to stage attacks on political targets with the proceeds of gas station robberies, investigators said. Authorities said they learned of the potential plot when Torrance police investigating the robberies found lists of targets and other information at one suspect's apartment in South Los Angeles.

Three years before that, a gunman killed two people at the busy LAX ticket counter of El Al Israel Airlines.

And in 2015, Syed Rizwan Farook and his wife, Tashfeen Malik, entered a holiday gathering for county employees at the Inland Regional Center in San Bernardino and, using rifles purchased by a friend, killed 14 people and injured 22 others.

Authorities alleged that Farook and a friend had plotted additional terror attacks targeting students at a nearby community college and drivers on the 91 Freeway.