Meet The Badass Army Vet With Her Sights Set On ‘Mrs. America’

Patti Gomez-Michalkow has a bit of an unusual resume for a pageant winner: she's a military veteran, a trained sharpshooter,... 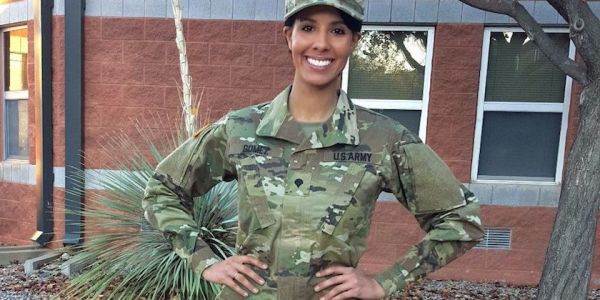 Patti Gomez-Michalkow has a bit of an unusual resume for a pageant winner: she's a military veteran, a trained sharpshooter, and in the process of getting a master's degree from Harvard University.

Gomez-Michalkow was crowned Mrs. New York last month during a pageant in Rochester. The Mrs. America contest is in August in Las Vegas.

She grew up in New York City, but her husband, Nicholas Michalkow, is from Camillus. Gomez-Michalkow has been in Syracuse for four years now. She and her husband both work at M&D; Financial in Syracuse. She does public relations for the firm and he is an insurance adviser.

Gomez-Michalkow, who is 28, decided to sign up with the 42nd Infantry Division of the New York Army National Guard when she moved to Syracuse.

“I had always wanted to join the military, but it was something that never really quite materialized while living in New York City. My work was very demanding and I kept putting it off. Finally, when I moved to Syracuse, I had the time to pursue my dream of being a soldier,” she said.

Gomez-Michalkow's service with the guard ended recently. She worked there as a “human intelligence collector,” and was also trained as a sharpshooter.

She'd never been in a pageant before, but the Mrs. New York and Mrs. America contest offered a good way of helping the charities Gomez-Michalkow works with, she said. She volunteers with Clear Path for Veterans in Central New York and is now also raising money for Homes for Our Troops, a national program that builds accessible homes for injured veterans.

Gomez-Michalkow also has been studying for a master's degree at Harvard University, but she's put it on hold for her military service and now for the pageant. She'll be back at the books in fall — unless she wins the title of Mrs. America in August.

Gomez-Michalkow was on Fox and Friends after she won the crown.